This piano-liked thing is what I called touch sticky note. I Use a piece of sponge as the paper, and put 8 x 8 LEDs under the sponge. Whenever I touch the touch screen, the related LED will turn on, and this is how I write for the sponge. 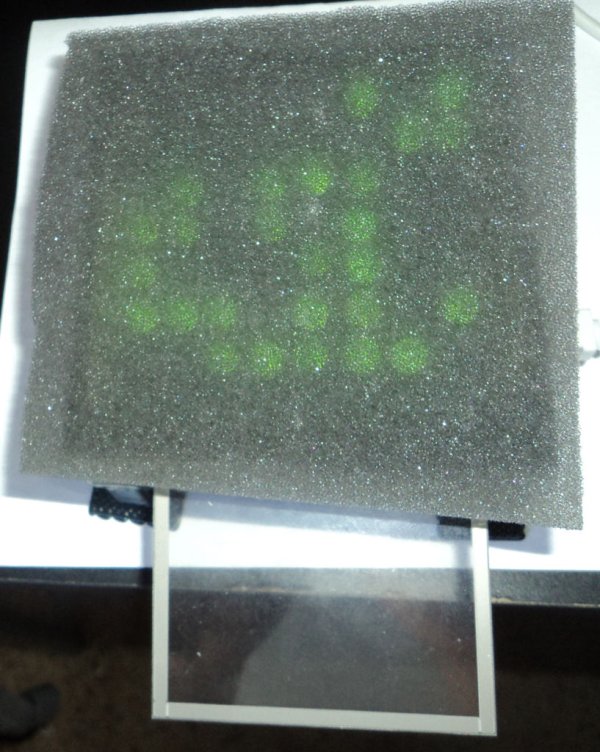 Because the matrix I use doesn’t contain the LEDs initially, I have to solder 64 LEDs to the board of matrix. Before soldering, I recommend to use a simple circuit to test each LED first to make sure it’s working, for this can prevent taking the broken led off the board.

I highly recommend soldering the LEDs at the very beginning, and then do other parts of the matrix. If you unfortunately did chip holders and chips before the LEDs, there is also a way to solder LEDs. You have to take the chip out of the chip holder first, and solder the LEDs every carefully, and then put the chip back.

Soldering is a time-consuming work, but it’s very important, because it can determine the performance of the final project.
After finishing the solder, you can use a code to text the matrix. I put two codes here for you to test. The first one is for testing whether the LEDs can light or not, and another one is for testing whether you can use matrix to control each LEDs or not.

– A 8 x 8 LEDs matrix
*The matrix I used here is from ModernDevice.com, and if you want to use the same matrix I used, you have to buy the LEDs as well. I recommend the 8 mm LEDs, because it perfect fits the board of matrix.

– A piece of sponge or anything which is transparent

– A case for all the things above
*I built the case by a 3D printer, but you can also by anything you like.

This Arduino based project was designed to solve a recurring problem for my hearing impaired wife. Our laundry room is...