Amazon’s Dash Button, which I previously mentioned back in late May 2015, is the ultimate in consumer convenience (or, if you prefer, consumerism gone crazy). Simply press a button on the inconspicuous adhesive-backed device (perfect for attaching to your washer and dryer, refrigerator, counter, or cabinet), and your Amazon account is charged for the purchase while the corresponding product gets automatically ordered and shipped to you. 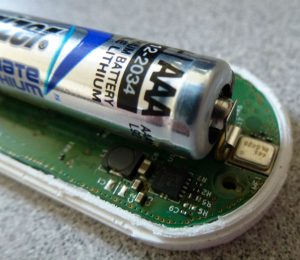 Initially unveiled on April 1, 2015 (therefore explaining why I at first thought the announcement was an April Fools’ joke from the company), they cost only $4.99, and Amazon more recently announced that it’d even refund the purchase price after your first associated-consumable order. How much hardware was Amazon able to squeeze into such a diminutive bill-of-materials budget, or perhaps more accurately, how much are Amazon and its consumable-supplier partners subsidizing the initial hardware cost in the hope of plenty of future generated profits? Let’s find out.

To begin, here are some views of the packaging for the particular unit I ordered, which is associated with Gatorade sports drink:

On the last one, you’ll note that (for privacy-preservation reasons) I’ve blurred out both the UPC and alphanumeric sequence associated with my unit’s DSN (Dash Serial Number). This code, as its name implies, is device-specific; in conjunction with your pre-configured Amazon account information, it indicates to Amazon’s servers what class of product is being ordered (Gatorade sports drink, versus any of the other items on the already-numerous and steadily growing list of consumables that the Dash Button service supports) and who’s ordering it.

Still to be configured upon initial product setup are your residence’s wireless network SSID and encryption password, and exactly what product you’re interested in button-press ordering (Gatorade flavor, for example, and packaging size and quantity). Stay tuned for more details on how both objectives are hardware-accomplished.

The packaging is Apple-like (or, come to think of it, Amazon-like, keeping in mind past products from the company that I’ve also used) in its simplicity:

The only thing inside the box aside from the Dash Button itself is a diminutive quick-start guide. Here’s what my Dash Button (3.2×1.2×0.6 inches; 1 ounce) looks like after removal from the box:

Note the small LED above the button, used both when initially setting up the Dash Button and subsequently as visual feedback of a successful order submission. Note, too, the mysterious hole above the Gatorade logo, whose function will be explained shortly:

The DSN is replicated on the unit’s backside, along with a QR code, both of which I’ve again obscured:

Recently Gesture controlled Laptops or computers are getting very famous. This technique is called Leap motion which enables us to...