Stroboscope (AKA zoetrope) is a device that creates an illusion of a moving picture by showing a rapid successions of frames  “stopped” for a fraction of a second due to the persistence-of-vision (POV) effect. It is a very old toy; zoetropes have been amusing crowds since 19th century. It makes it all the more fun to make one out of decidedly 21st century parts!

The project was inspired by my own interest in zoetropes (non-electronic variety) since my childhood. Many a good book were spoiled by drawing stick figure stop motion animations on successive pages … But I digress. 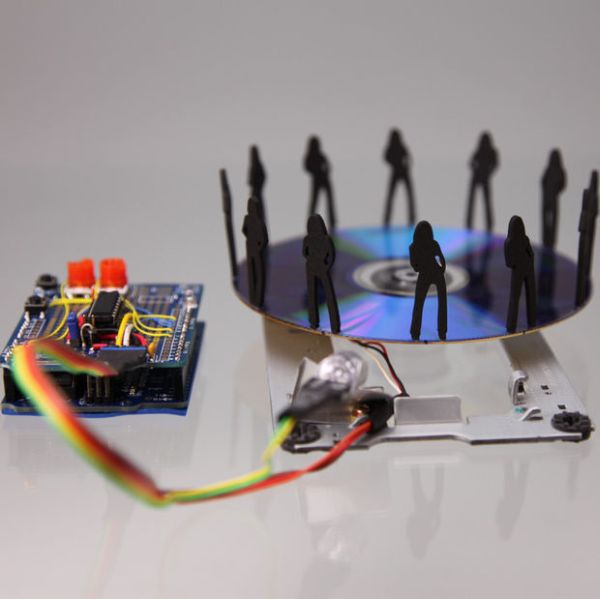 I am also very interested in all kinds of motor control and I did not have much experience with brushless DC (BLDC) motors before starting this project. I’m glad I did because BLDC is a fascinating technology and I’m now trying to upgrade some of my motors with stronger magnets to see if I, too, can make an RC plane fly on one of those. I’m afraid there won’t be much space to go into details of BLDC operation here, so I invite anyone interested to visit my blog and read the recent entries on BLDC theory, circuits and software.

Additionally, since BLDC motors are used in pretty much every CD/DVD/Bluray device out there, I had a huge pile of these BLDC motors ever since I started breaking DVD-RW drives to harvest lasers from them. This in large part was the influence of another instructable I read right here, written by Groover, the Pocket Laser Engraver . Ironically, I’ve yet to build by own (I already had a larger one) but I can’t stop tearing apart broken DVD drives and the pile of available parts just keeps growing 🙂

Apart from the Arduino, my basic goal was to reuse as many parts from the DVDs as possible.

1. Arduino (any variety – the sketch is very small)

2. Arduino Development Shield – with breadboard or without. The circuit is rather small, can be easily built on a breadboard but soldering the parts to the board instead will make it sturdier. The empty Development Shield PCBs are rather cheap these days, I buy them in bulk and solder my projects on them permanently.

3. A broken Xbox 360 DVD drive. The only working part we are concerned with is the spindle motor and you have to really seriously abuse  the little motor to do any damage to it. I’d say the rest of the Xbox would burn before the DVD spindle motor would get damaged, so you’re pretty safe buying it on your favorite online flea market sites.

4. 1 x SN754410NE Quadruple Half-H Driver IC (SN754410NE datasheet here) . Of all the Half-H drivers this one is probably the least expensive. I sourced mine from a Chinese seller on my favorite online flea market site. You can do the same or try any electronics parts seller out there – Mouser, Newark, anyone is almost guaranteed to carry it – it’s very popular.  SN754410 is also used in driving bipolar motors, so get yourself a couple of these for future projects.

5. A 1W High Intensity White LED with 10mm round transparent body.  A different LED of similar or higher intensity will do just fine, as long as you devise a bracket to hold it and point toward the disk with zoetrope animations.  The bridge on SN754410 that controls the LED can drive 1A and the LED is on for only 2ms (milliseconds) at a time, so I guess you can go as high up as 3W-4W LEDs without much concern.

6. 2x  push buttons to populate the Development Shield. One of them becomes the Reset button and the other is the Direction button

7. 1 x small 3mm LEDs – the color of your choice to populate the Development Shield. It becomes the direction indicator LED

9. 1 x 5-pin connector  of your choice if you want the Arduino to separate from the spindle (optional).

10. 2x 0.10uF caps to filter noise on the supply bus of the Shield (optional but desirable).

13. 2 x 2-pin jumper headers and one jumper – one of those headers needs to be shortened

14. OPTIONAL: if your Arduino Development Shield did not come with the stacking headers, you need those. It uses 2 x 8-pin and 2 x 6-pin headers.

15. You’ll need some old CDs to become the base of your animations.

You’ve got all the parts, now get some flux and solder. We’re going to make some fumes! (unless you’re building on a breadboard of course …)

Step 1: HOW IT WORKS The working of a project is simple. It is also very important to understand it...