Introduction
I created the StorageBot to help solve a problem experienced by most Makers. After many years of accumulating thousands of parts stored in storage bins, I began to go crazy looking for parts scattered between so many of these bins. The hardest parts to find were always those rare miscellaneous parts that were thrown somewhere into a “junk” bin. StorageBot solves the location problem by listening to my voice commands, processing the location of parts from a master database and then delivering the matching bins in a manner that only a robot can do!

StorageBot does have a bigger picture when it comes to purpose. I explain in my video that it’s not about building a StorageBot that’s important, but rather it’s the skills we can learn from such projects that help to enrich our knowledge and inspire us to build the next great thing or start the next cool business. 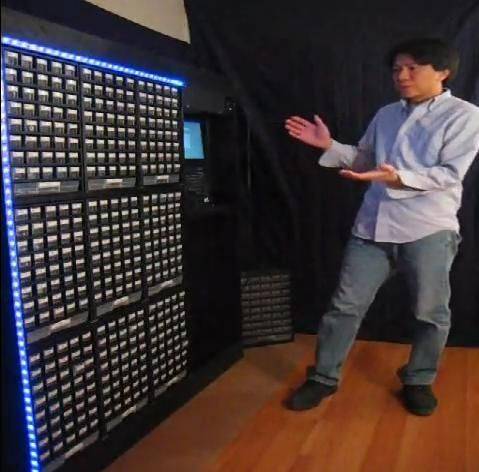 In this Instructable you’ll gain insights into the electronics, mechanics and software systems used to create useful projects by utilizing commonly available components such as the Arduino and stepper motors.

If you find this project inspirational and helpful then don’t forget to vote for it in the ShopBot contest. I would use a ShopBot to create the ABS parts, aluminum parts and vaccuum form molds for my next generation home robots.

The video above gives you a glimpse into the frame and mechanisms required to physically push out each bin based on the voice commands.

I’ll describe the system by breaking it into the basic components. Here’s an outline:

When buying pine wood from Home Depot make sure you spend time selecting the best pieces of straight wood. I found the wood at the top of the stack is typically the most crooked pieces. Some of this lumber may be returned items and obviously people would return the worst of the pieces. Here’s a trick to help determine the straight pieces. Place the piece of wood on the flat concrete floor and use the floor as a straight edge. Stay away from wood that is twisted along the length. Long pieces of wood that bow slightly in the middle can be ok if a later process such as screwing into the final framing straightens them out.

I modeled the pine frame using the free 3D CAD program from Autodesk called 123D. You can download the program here:

The cool thing about this program is that you model the components of your systems and then connect them together using something called constraints. In 123D constraints are under the Design Intent \ Assemble Icon. With constraints I can tell 123D to take 2 separate pieces of pine wood and align the edges to each other. Another useful feature of 123D is the Browser history along the left side of the screen. With this browser I can easily turn components on and off by just clicking an “eye” icon for each component. I used this feature in order to generate the step by step images for the frame construction.

The 123D model of the pine frame is attached below as a zip file. Have fun playing with 123D and be sure to watch the tutorial videos on YouTube.

X is the axis that moves between the left and right side of the StorageBot. This axis also has to support the weight of the other axes, Z and Y.

Like many Makers I sometimes struggle coming up with the best design approach. My first attempt at prototyping the X axis was unsuccessful due to binding issues.  When building any rail system mounted to a wooden frame one has to compensate for wide build tolerances. For example: the wood isn’t always straight, there may be warpage with temperature and humidity, cut lengths are slightly different, etc. The final solution I came up with was inspired by a rail system that was already used in my house. It so happens I have pocket doors and the rail system used on those doors can also be adapted to the StorageBot.

Pocket door hardware is an inexpensive and simple system for producing linear motion while hanging a lot of weight such as a door (or equivalent on the StorageBot). See the attached pictures on how I adapted this simple system. This is a great example of how being observant to the world around you can provide insights into solving problems. 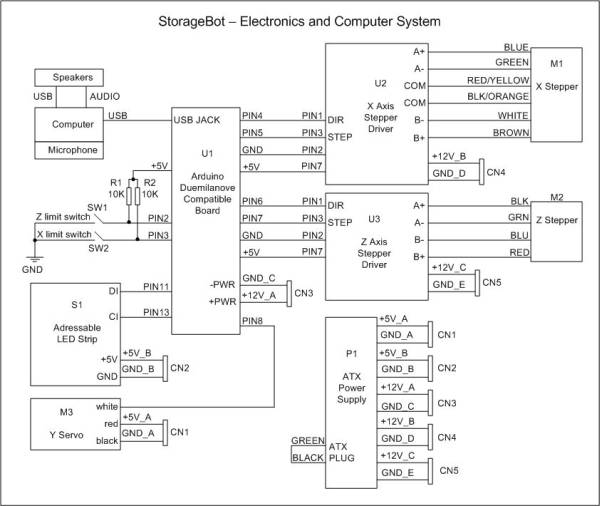 When I designed the x-axis I was also thinking about how the z-axis would integrate into the design. It was obvious that the “door frame” being hung from my pocket door rail system would serve as the frame for the z-axis. The z-axis in this case refers to the vertical movement between the bottom and top levels of the StorageBot.

I already determined the z-axis would be belt driven and there would be a drive pulley and an idler pulley creating the ends of the belt system. When the belt moved it would have to move a carriage up and down in the vertical direction.

The challenge was coming up with a low cost way to guide the z-axis carriage along the vertical direction. There was already a vertical frame made out of wood so I wanted to use that as a guide. Using wood as a linear guide can be tricky due to sticking from friction. I finally came up with a solution based on some past tinkering with a bin full of spacers. Once again, curiosity paid off.

In the attached pictures you’ll see how I used two different sized spacers, one made out of aluminum and one made out of nylon to form a low cost roller guide. Who ever knew playing with a bin full of spacers and noticing how some fit within others would pay off!