Many times we are  faced with a heat containing coffee and don’t  know if the fluid is at  the proper temperature and it is impossible to know just by looking at  the bottle ended up losing time with a coffee that is cold and we get  upset about it. 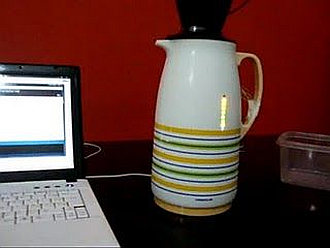 This however  indicates maker by a graph LEDs if the liquid is hot, warm or cold. The LEDs gradually  connect the blue (cold) to red (hot), when there is a heating and go off  when there is a cooling.

The temperature sensor was removed from the tip of the digital thermometer and connected to the Arduino as shown below: 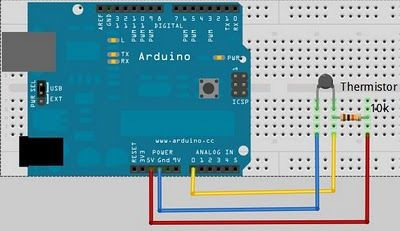 The sensor was placed inside the glass bottle with a long wire.
I developed a code that was based on another that controls the LED graphics that was modified and adapted to the needs of the project. In this program you can also see the serial port of the Arduino IDE value read by the sensor and the number of LEDs that are off.
Results:
It was possible to detect the gradual change in temperature of the fluid within the thermal result of cooling or heating the graph of LEDs.

To develop the project were used:

Nine holes were drilled in the side of the thermal with a hot iron of the same diameter of the LEDs.

Wires connected the leds of the pins 5 ao 13