Numitrons are neat display devices similar to nixie tubes but designed for much lower voltages. Numitrons are basically incandescent displays in which filaments create the segments. 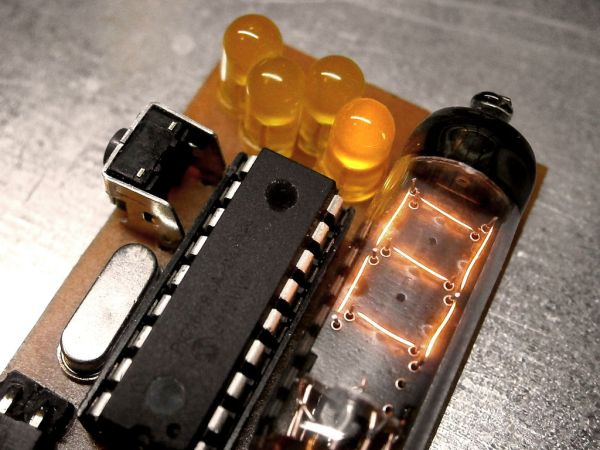 They have a retro look that i liked so much. I bought 6x IV-9 russian numitrons in ebay, they were about 3$ each, they’re pretty cheap!
At that time i didn’t know what to do with them, but then i thought about a clock. Using software from a single LED display clock i made this impressive numitron clock.

The clock operates off a PIC 16F84A using a program written by David Tait (software is further down this page). The crystal oscillator for the clock is a 4MHz crystal.

I think another microcontroller such as PIC16F628A could also work fine.

After testing on the breadboard,  the clock works fine, with the current crystal the clock comes forward a minute each 3 days, with a precision one it can be solved, but it’s good enough for me; because setting time is easy.
You can see the test video below and download the eagle schematic to modify it.

Since numitron displays are just complex bulbs, it could be a problem to drive them from the processor, but in this case, it’s not a problem:
The PIC16F84A can source or sink 25mA per I/O pin.

But each port has a limit:

With IV-9/IV-16 each segment draws 20mA, but be careful if you choose another numitron!

CustomKeys is a customizable, Arduino-based, polyphonic synthesizer. The CustomKeys keyboard uses capacitive touch sensing - each key is made of...