Scientists at the Nanyang Technological University (NTU) in Singapore have developed a smart window that is able to tint itself blue, partially blocking incoming light, without the need for an external power source. The device also functions as a small transparent battery that recharges on its own simply by interacting with the oxygen in its surroundings.

Indoor cooling can make up a sizeable percentage of a building’s power consumption. To help with the problem, we’ve seen a number of “smart windows” pop up that act as high-tech shutters to shield incoming light during those hot sunny days. 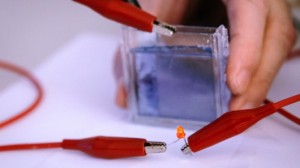 The prototypes we’ve seen so far  –  whether designed for use in buildings or public transport, controllable with a light switch or wirelessly through a smartphone  –  generally rely on an external power source to function, which is both a hindrance and an ongoing additional cost. And though they are better looking and make for techier gadgets than your standard blinds or curtains, in the end, even the self-powered models are fairly limited in their functionality.

Professor Sun Xiaowei and colleagues at NTU have developed a self-powered smart window that is bi-functional. It can not only tint itself blue at the flip of a switch, but also act as a transparent electrochemical battery that can slowly charge itself by absorbing oxygen from it surroundings.

The window consists of two glass panes connected by electrical cables, with an oxygen-carrying liquid electrolyte in between them. The panes are wrapped inside a transparent conductive coating which is attached to an aluminum foil on one side and coated with an oxygen-sensitive blue dye on the other.

This article and circuit diagram show how to connect a buzzer to an Arduino when the buzzer operates at a...