This robot that can solve a Rubik’s cube using Arduino.

I learned how to solve a Rubiks cube last year, and I was also into Arduino, so eventually I ended up with an idea to make my own Rubik’s cube solver.

Like many people searching for “Rubik’s Cube Solver” on Google, one of the first robots I found was the Tilted Twister design by Hans Andersson:

I looked around at some other Rubik’s cube solvers, but I liked that design because of it’s (relative) simplicity, so I built a similar version of it with popsicle sticks, an Arduino and 2 servos.

In the end, my robot takes about 20 minutes to enter the cube state and solve.

You can get all of these parts from any robotics store. I got them from canadarobotix.com

– wooden wheel (skewer must fit inside the hole)

Wiring up the servos to the Arduino is pretty straightforward

1. Connect the yellow (signal) wires from the push and rotation servos to pin 6 and 9, respectively.

2. Connect the positive and negative wires to the 5v power source and ground. Sometimes the servos had jitters, so I think a few capacitors could have smoothed out the current.

I looked at a few designs but settled on the Tilted Twister because it only required 2 servos to operate, which wasn’t as complex mechanically as other robots such as the Cubestormer.

So here’s how the mechanism basically works:

1. A platform holds and rotates the cube.

2. The arm pushes and holds the cube.

When I first tried to build the solver, I tried to follow building instructions here:

But I was pretty lazy and didn’t follow the instructions, so I made a wooden replica with a few tweaks.

I haven’t documented every step of the build process, but I think you can reproduce the tilted twister design with a few tweaks:

1. Slanted sticks to prevent the cube from snagging.

2. To build the arm joints,

– I drilled a hole into ends of the popsicle sticks.

– I inserted the skewer into the sticks

– Glued wooden wheels that act as washers on each end.

Honestly building the physical solver was a lot harder and complex than I expected, so if you have any questions on how I built the solver, just ask.

So basically the code I wrote uses combinations of pushes, holds and platform rotations to apply algorithms to the cube.

There are 3 main parts of my code: the algortihm, GUI (enter cube state) and the serial communications

Let’s start with the Arduino sketch. It basically uses algorithms to manipulate the cube colours:

1. There are 6 char arrays represent each face of the cube.

2. Using a basic layer by layer method of solving the Rubik’s cube, I made a function, cube_decide(), that goes through each stage or the cube solving process.

3. Within each stage, such as cube_decide_cross() (solving the cross), the program would check for specific locations of colours in the cube, and if an algorithm was matched with the condition, cube notation like ‘U’ (Up) or entire algorithms, like fix_cross_instance_1() would be run.

4. The cube notation and algorithms control the servo functions, such as push_cube() or rotate_one(). 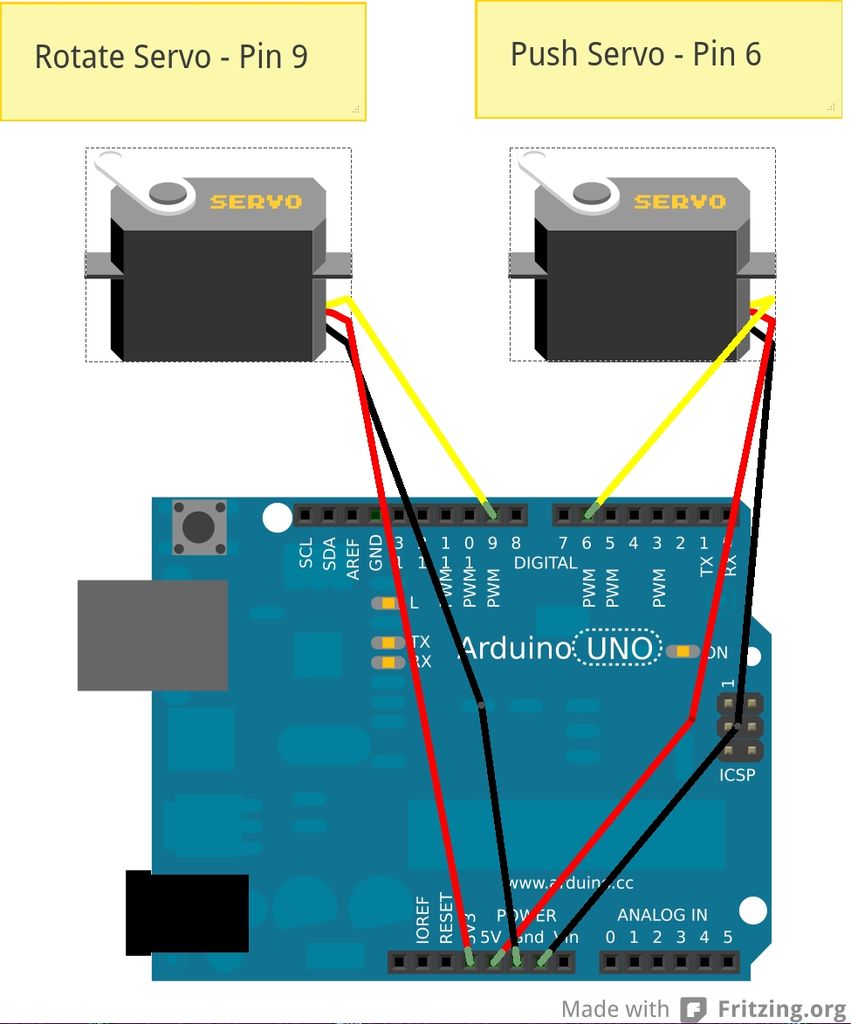 Here’s a basic overview of the code structure (layers of abstraction):

One major breakthrough I had was that I actually simulated the cube’s movements in the program. The program reassigns the values in the arrays to simulate and cube rotation. This way, the program can simulate the cube move before it physically executes it.

I needed a better way of entering the cube state than directly typing them into the Arduino sketch, so I got the idea of creating a GUI from this robot: [Play Video]

Because I’m new to making Tkinter GUI’s (Graphical user interface) and didn’t want to make one from scratch, I found a tic tac toe GUI here.

Then I turned the 3×3 array of buttons into something resembling a cube and added a few buttons. I also added buttons that would change colour each time they were clicked. Finally I made 5 more windows that would pop up one after the other, and transfer the colours entered into a local array in the script.

However, I really slapped the code together in a mess, since I simply copy and pasted 6 separate windows, with almost identical functions. Any suggestions on how I could clean up the code are welcome!