RFID is a non-contact, automatic identification technology that uses radio signals to identify, track, sort and detect a variety of objects including people, vehicles, goods and assets without the need for direct contact or line-of-sight contact (as found necessary in bar code technology). RFID technology can track movement of objects through a network of radio-enabled scanning devices over a distance of several metres. A device called RFID tag, or simply a tag, is a key component of the technology. These are actively used in RFID based access control systems implemented in offices all around. 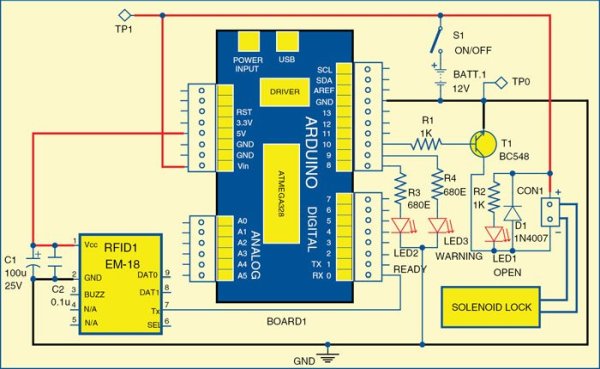 An RFID reader emits a low-level radio frequency magnetic field that energises the tag. The tag responds to the reader’s query and announces its presence via radio waves, transmitting its unique identification data. This data is decoded by the reader and passed to the local application system via middleware. The middleware acts as an interface between the reader and the RFID application system. The system then searches and matches the identity code with information stored in the host database or backend system.

In this way, accessibility or authorisation for further processing can be granted or refused, depending on results received by the reader and processed by the database.

Fig. 1 shows the circuit of RFID based access control using Arduino board. The circuit is built around Arduino UNO board (Board1), RFID reader module (RFID1), solenoid lock and a few other components.

Arduino is an open source electronics prototyping platform based on flexible, easy-to-use hardware and software (called sketch). It is intended for artists, designers, hobbyists and anyone interested in creating interactive objects or environments.

Arduino UNO is a board based on ATmega328 microcontroller. It consists of 14 digital input/output pins, six analogue inputs, a USB connection for programming the on-board microcontroller, power jack, an ICSP header and a reset button. It is operated with a 16MHz crystal oscillator and contains everything needed to support the microcontroller. It is very easy to use as the user simply needs to connect it to a computer with a USB cable or power it with an AC-to-DC adaptor or battery to get started. The microcontroller on the board is programmed using Arduino programming language and Arduino development environment.

Pin 0 (RX) of Board1 is connected to pin 7 (TX) of RFID1. Pin 10 of the board is connected to solenoid driver transistor T1 through base resistor R1. When pin 10 goes high, T1 conducts and solenoid is activated, which means lock is opened.

In this project we used EM-18 RFID reader module (Fig. 2) operating at 125kHz. The module comes with an on-chip antenna and can be powered with a 5V power supply. The transmit pin (TX) of the module should be connected to receive pin (RX) of Arduino UNO board. Some specifications of the module are listed in Table I.

An RFID tag is a smooth card of credit-card size (Fig. 3), which is read by an RFID reader. It works at 125kHz and comes with a unique 32-bit ID. Normally, each tag has a unique ID number which cannot be changed. You can find out its unique ID through software.

The software for this project is written in Arduino programming language. The Arduino UNO is programmed using Arduino IDE software. Atmega328 on Arduino UNO comes with a boot loader that allows you to upload new code to it without the use of external hardware programmer. It communicates using STK500 protocol. You can also bypass the boot loader and program the microcontroller through in-circuit serial programming (ICSP) header, but with boot loader the programming is quick and easy.

An single side PCB layout for the circuit

There are two sketch software codes for this application: ReadTag.ino for reading the tag’s unique ID and AccessControl.ino for the main application.

To read the tag’s unique ID, first you need to upload ReadTag.ino sketch into Arduino board by following the steps given below:

1. Connect TX pin of RFID1 to RX pin of Board1 as shown in the Fig. 1
2. Launch Arduino IDE. Connect Board1 to your PC and select the correct serial COM port and Board from Tools menu. Open ReadTag.ino sketch and compile it using Arduino IDE.
3. Burn ReadTag.ino sketch into the microcontroller in Arduino board
4. Open Serial Monitor from Tools menu in Arduino IDE
5. Hold RFID tag close to RFID1
6. Note down the tag ID shown on the Serial Monitor window. This ID will be used in the sketch later in the main application

A Smart Pot that has all the component inside of the pot and gives the light and humidity data to...