Several years ago when I started messing around with Arduino and building my own weather station, I bought a few XBee radio chips with the idea of setting up some more remote sites without having to run wires out to the sensor stations. I spend several frustrating hours trying to get the radios to talk to each other, but couldn’t get them to work (I think this was because they were in API mode instead of AT mode). Then I got Building Wireless Sensor Networks and Arduino Cookbook and finally got 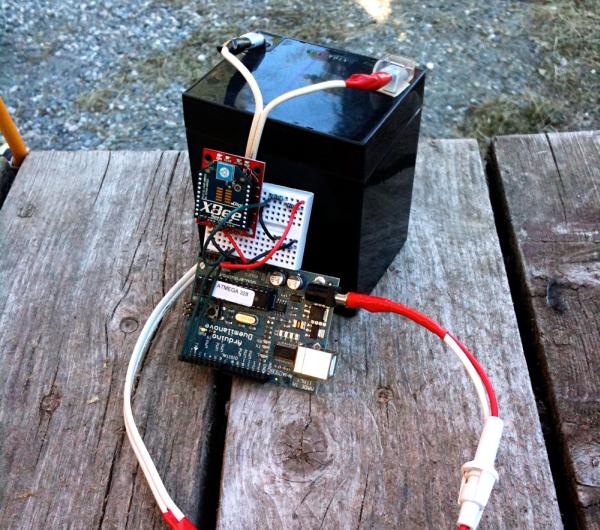 At the same time, the batteries in our UPS at work needed to be replaced, and rather than immediately recycling them, I took a couple home to see if they still had enough juice in them to work in a remote sensing capacity. They’re 12 volt lead-acid batteries (which may make them unsuitable for winter) that were rated for 5 Amp-hours when they were new. That should be plenty of power to drive an Arduino, XBee and a couple sensors. The XBee chips have some data pins on them, so I may be able to eliminate the Arduino from each sensor station, depending on the type of sensor I use.

The current setup, shown in the photo at the top, is designed to see how long a remote station can run on one of the batteries without any sensors and at springtime temperatures (typically between 20°F and 60°F at our house). The Arduino is reading the input voltage and sending it wirelessly to an XBee coordinator plugged into a SparkFun explorer board and connected to my small eeeBox computer.

For more detail: Remote sensing with Arduino and XBee