LAKE WALES, Fla—Quantum dots are already being used commercially to boost the output and expand the color range of ultra-high-definition televisions, eliminating the need for the rare earth elements for which China as virtually cornered the market. Quantum dots, however, can also be used to absorb light to boost the output of photovoltaics, photocatalysts, light sensors, and other optoelectronic devices according to Brookhaven National Laboratory (Upton, N.Y.) 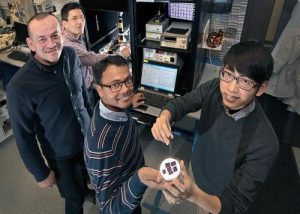 “Our particular 2-D material system (SnS2) [tin disulfide] is similar to Si [silicon], in that it has an indirect band gap, not providing sufficient electroluminescence for light-emitting diodes, but there are other 2-D materials with high luminescence such as MoS2 [molybdenum sulfide] WS2 [tungsten disulfide] which can be used in view of the Qdot-2D hybrid architectures for LEDs,” Mircea Cotlet, the physical chemist who led this work at Brookhaven Lab’s Center for Functional Nanomaterials (CFN ), a Department of Energy (DoE) Office of Science User Facility, told EE Times in an exclusive interview.

Instead of emitters, Brookhaven concentrated on receivers of optical energy in layered metal dichalcogenide semiconductors—dual chalcogen anions (ions with more electrons than protons) plus one or more electropositive elements usually sulfides, selenides, and tellurides, rather than oxides—in Brookhaven’s case sulfide). Brookhaven did the work with Stony Brook University (including doctoral candidate Prahlad Routh) and the University of Nebraska.

Hello friends, I hope you all are doing great. In today’s tutorial, we are gonna design a project named DC...