A few months ago +Neil Darlow mentioned that he had replaced his Mendel90 fan with a quiet version and it seemed to give better cooling results. This made me curious because quieter fans of the same dimensions generally spin slower and produce less airflow. So I purchased one to compare but then realised I had no better way of judging its efficacy than holding my finger in the air stream to feel the breeze. With these two fans it was too close to call. 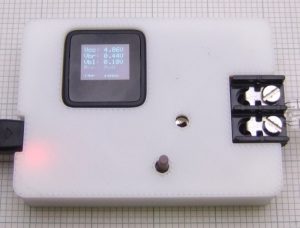 After a bit of Googling I found that an easy way to measure localised airflow is with a hot wire anemometer. These heat a wire by passing a current through it and then measure how much the airflow cools it. The current and voltage can be used to determine both the resistance and the power dissipation using Ohm’s law. The resistance can then be used to determine the temperature knowing the thermal coefficient of the metal that the wire is made from. The extra heat loss due to the airflow is proportional to the square root of the flow rate.

A popular circuit configuration is a constant temperature anemometer as described here, but note the op-amp inputs are labelled incorrectly. An op-amp is used to adjust the voltage across a Wheatstone bridge to keep it in balance. The bridge consists of three fixed resistors and the hot wire, so when it is balanced the wire has a known fixed resistance determined by the other three. Because the power is controlled to keep the resistance constant it follows that the temperature of the wire is constant. The voltage on the bridge can then be used as a measure of the heat carried away by the airflow.

Tungsten is commonly used for the hot wire, presumably because it has a reasonably high resistivity, temperature coefficient and resists oxidisation. I hatched a plan to use a small light bulb with the glass removed, mount it on the bed of a printer and move it around under the fan duct to plot a map of the airflow.

This is a small 12V 0.8W bulb. Its cold resistance is about 15Ω but more than ten times that when hot. This is why bulbs take a massive surge current for a few milliseconds when they are switched on.

I was wondering about how I was going to calibrate the airflow reading but then realised that the flow rate is not actually what I am interested in. It is the cooling effect the airflow has, which is what I am directly measuring. The result is simply the extra power needed to maintain a target temperature and is a measure how fast the bulb filament is being cooled. So rather than an anemometer I decided to call it a coolometer. Unfortunately Futurama used that name first. Rather than displaying megafonzies mine displays milliwatts!

Use the PN532 NFC available on the anduinoWiFi shield to create an RFID keycard building access system. Motivation Keys are...