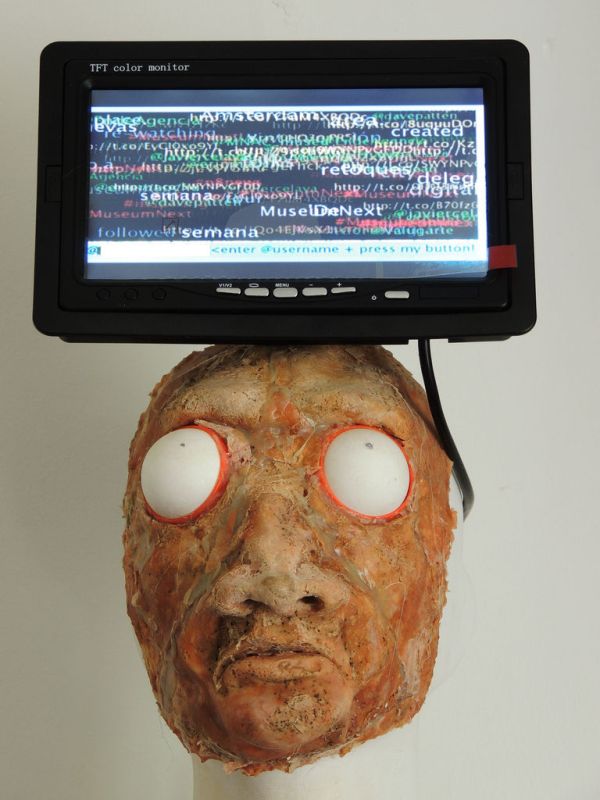 The Psychic Hive-Mind Fortune Teller is a fairground arcade-type attraction which can tell your fortune. Even better than that though – it’s also a web-connected Twitter application that can harvest tweets and regurgitate them as fortune readings!

The Fortune Teller reads the mind of a twitter discussion. It takes people’s thoughts from their tweets, then deconstructs them into base content. It then reconstructs that content with randomised connecting text fragments to create the fortune reading. By doing this, it creates readings which are not just unique, but also context-specific and completely up-to-date as they are generated from current discussion happening live in real time.

As well as speak your fortune and tweet it back to you, it also has a window into its brain, through which you can see the inner thoughts of the twitter discussions it is scanning.

What can you get from this Instructable?

This Instructable shows you

Step 1: Psychic Hive Mind Fortune Teller in action and summary of what it is doing 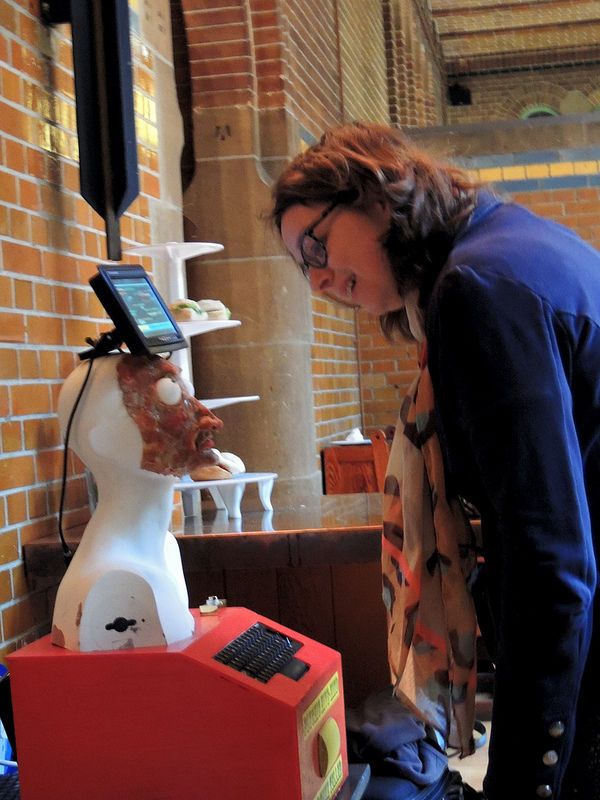 The Psychic Hive Mind Fortune Teller is designed to be used at events where people are gathered and discussing online via Twitter. When people interact with the Fortune Teller, it gives them insights into the live Twitter conversations happening around them.

It is really a type of automoton, but one that can be tuned into the specific conversation of the event at which it is present. It just needs to be set up to target the event, then it will serve up real-time reflections automatically, based on the digital conversation happening around it. In effect, it reads the collective mind of the event, hence why it’s called the Psychic Hive-Mind Fortune Teller. It can easily be programmed using simple admin settings that determine what it listens to on Twitter. These can be set remotely using a Google spreadsheet as a web database.

Here it is in action at museum-technology conference “MuseumNext”, in May 2013, in Amsterdam.

This 47 second clip shows what an event-goer experiences when they come across the Psychic Fortune Teller – generally bafflement!

To have their fortune told, a person interacting with it just has to enter their twitter @username and press a physical button. The Fortune Teller’s Twitter-app brain then reads tweets harvested in real time and dissects them into their component parts of usernames, hashtags, urls and other general words. It then rebuilds them with randomised sentence construction to generate rather leftfield recombinations. Finally it sends a tweet containing a summary of the fortune reading to the person’s twitter account.

The Fortune Teller uses the irrestible appeal of freaky fairground things and plugs in the social web, piggybacking on some of the many data connections that we trace in our digital lives.

In using digital social media, aspects of our communal connections are translated into and back from data. The Fortune Teller uses this to create a new physical re-manifestation of our digital interactions. It ponders what it means to be part of a large-scale collective ‘hive’ conversation, how digital social media creates random and unexpected insights and connections with people clustered around interest, and reflects on the meaning of sharing ideas on the web.

The automaton is tuned to an event discussion by being logged into Twitter. It is programmed to harvest tweets by conducting one of three searches. Usually this is a #hashtag search, but it can be set up to do a @username search or just a straight keyword search. It then extracts the basic content in four types

It then constructs random fortune readings using these terms, that it speaks to the visitor, and then tweets them a summary.
Here are some other baffled looking people!

Step 2: Design – techniques for working up a concept – from vague idea to fully developed creepy thing

Here’s how I worked up the design for the physical thing.

I started by pondering what a creepy fairground head that reads tweets, should look like!

There were a few constraints and some wish-list desires. I knew roughly what I was after and here’s how I developed the concept to create a real thing that was suitably weird, but also practically could be built.

I essentially needed to get a clear picture of something in my mind that was a slightly creepy head with a big monitor. Once I had decided on that, I just had to play about with possible variations until I had the design worked up nicely.

The technique I use for this sort of design development is to just draw lots of versions of what I am roughly after. This technique is not trying to  produce an exact design of the final object (in this case the head and it’s plinth). The idea is just to explore variations until the right one emerges. The process of doing los of drawings quickly is deliberate to avoid getting too attached to any one of them. Each individual drawing is not important, it’s the strength of the mental “feel” in the mind that matters. This is established by the combination of all the images.

This method may not suit everyone, but it’s worth a try. It certainly works for me. Once the final look is established, I also find to useful to redraw it a few more times. This gives me enough of a feel for how the finished thing, to be able to sculpt and build a variation on it later from my mind.

It’s not a build plan or blueprint though. It remains a mental concept. This design technique is to fix something in the brain that just has a general visual shape and an overall emotional feel. Once fixed in the mind, it helpd guide the hands later when sculpting and building it in 3-d.

Ink pen is also fast and clean. The one on the left below was a more advanced version of the design. With ink, you can also colour it separately too. The right hand version used Promarker fibre-tipped pens, which are like a colour wash

For more detail: An automaton that reads the mind of Twitter