(Phys.org) —A group of Korean researchers have turned their focus on supplying a reliable, efficient power source for wearables. Professor Byung Jin Cho of the Korea Advanced Institute of Science and Technology (KAIST) and his team, recognizing that supplying power that is stable and reliable is critical to the successful commercialization of wearables, have come up with a wearable power band that made technology news this week. The team noted that a flexible thermoelectric (TE) power generator would be the way to go to realize a wearable self-powered mobile device. They developed a wearable band-shaped item that produces electricity from the heat of the human body, The device size is 10 cm x 10 cm. Wearable electronics must be light, flexible, and equipped with a power source, which could be a portable, long-lasting battery or no battery at all but a generator, according to a KAIST release on Thursday, providing details about their work.

The concept and design technique involves building a thermoelectric (TE) generator that minimizes thermal energy loss. The release pointed out that thermo-elements are not new. To date two types of TE generators have been developed. 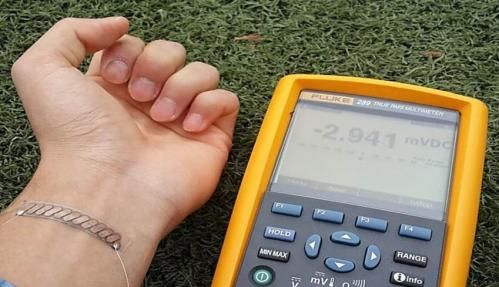 The distinguishing feature of the KAIST team’s device is that their thermo-element is lightweight, high in electric power production efficiency, and is made with glass fiber. Said Prof. Cho: “The glass fabric itself serves as the upper and lower substrates of a TE generator, keeping the inorganic TE materials in between. This is quite a revolutionary approach to design a generator. In so doing, we were able to significantly reduce the weight of our generator (~0.13g/cm2), which is an essential element for wearable electronics.”

I got this idea for a while but I never had the chance to try it out. Friday, a workmate...