PCB BOARDS- THE THING THAT CHANGED THE WORLD OF ELECTRONICS

In this article we are going to see about what is PCB board and some types of PCB board.

pads and other features etched from one or more sheet layers of copper laminated onto and/or between sheet  layers  of  a non-  conductive substrate. Components are generally soldered onto the PCB to both electrically connect and mechanically fasten them to it.

Before the development of printed circuit boards electrical and electronic circuits were wired point-to-point on a chassis. Typically, the chassis was a sheet metal frame or pan, sometimes with a wooden bottom.

Components were attached to the chassis, usually by insulators when the connecting point on the chassis was metal, and then their leads were connected directly or with jumper wires by soldering, or sometimes using crimp connectors,

wire connector lugs on screw terminals, or other methods. Circuits were large, bulky, heavy, and relatively fragile (even discounting the breakable glass envelopes of the vacuum tubes that were often included in the circuits), and production was labor-intensive, so the products were expensive.

Alternatives to PCBs include wire wrap and point-to-point construction, both once popular but now rarely used. 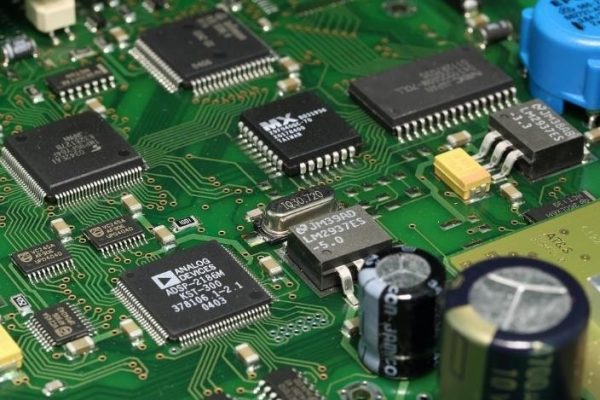 PCBs requireadditional design effort to lay out the circuit, but manufacturing and assembly can be automated. Specialized CAD software is available to do much of the work of layout.

Mass-producing circuits with PCBs is cheaper and faster than with other wiring methods, as components are mounted and wired in one operation.

This type of printed circuit board contains just one layer of substrate, or base material. One side of the substrate is covered with a thin layer of metal, typically copper because it’s an excellent electrical conductor. Usually, a protective solder mask sits on top of the copper layer, and a final silkscreen coat may be applied to the top to mark parts of the board.

A single-sided PCB has electronic components and circuits on only one side. This type of board works best for simple electronics, and at-home hobbyists often design and construct this type of board first. Single-sided boards tend to cost less to mass- produce than other board types.
But despite this low cost, they’re used infrequently because of their inherent design limitations.

Double-sided PCBs are much more common than single-sided boards. Both sides of the substrate have metal conductive layers, and parts are attached to both sides as well. Holes in the board allow circuits on one side to connect to circuits on the other side.

Multilayer PCBs expand on the technology used in double-sided boards. They have several layers of substrate boards, and insulating materials separate the individual layers. As with double-sided boards, components on multilayer boards can connect to each other through holes in the board.

The multilayer design saves even more space than a double-sided design. Typical multilayer boards have 4, 6, 8, or 10 layers, but they can have more, depending on the demands of the product the board is intended for. Multilayer PCBs are found in equipment like computers, servers, medical machinery, and hand-held devices.

In addition to having various numbers of layers and sides, PCBs can also come in varying rigidities. Most consumers typically think of rigid PCBs when they picture a circuit board. Rigid PCBs use a solid, inflexible substrate material such as fiberglass that keeps the board from bending. A motherboard inside the tower of a desktop computer is a good example of a rigid PCB.

The substrate in a flex PCB is usually a flexible plastic. This underlying material allows the board to fit into shapes that rigid boards cannot and to bend or move during use without damaging the circuits on the board.

Although flex PCBs tend to cost more to design and produce than rigid PCBs, they come with a number of advantages. For example, they can replace heavy or bulky wiring in advanced equipment, like satellites, where weight and space matter. Flex PCBs can also come in single-sided, double-sided, or multilayer formats.

READ  Cloom Published an “Electrical connector–Everything You Need to Know”

Highly specialized not only in quick-turn PCB prototype and PCB assembly, but also medium and small volume PCB fabrication. We have three factories, established over 17,000 square meters; fully compliant with the ISO 9001:2008 quality management system, UL certified and committed to adhering to the strictest standards in manufacture and assembly.

Operating since 2015, PCBGOGO has delivered over US $1000000 worth of electronic components and prototyping services to more than 20000 customers all over the world.

“Full refund will be offered if there is any problem in PCB and assembly quality which could not be solved!” their CEO, Eric Wu said. Long-term business cooperation is PCBGOGO’s goal. Even if the price is not cheap, quality and service will be best.

The measurement and analysis of process parameters such as temperature, flow, conductivity, speed, viscosity, and stress play a crucial role...