The DDC lines use a new buffering concept which decouples the internal capacitive load from the external capacitive load for use with standard Complementary Metal Oxide Semiconductor (CMOS) or Low Voltage Transistor-Transistor Logic (LVTTL) I/O cells down to 1.8 V. This buffering also redrives the DDC and CEC signals, allowing the use of longer or cheaper HDMI cables with a higher capacitance. The internal hot plug detect module simplifies the application of the HDMI transmitter to control the hot plug signal. 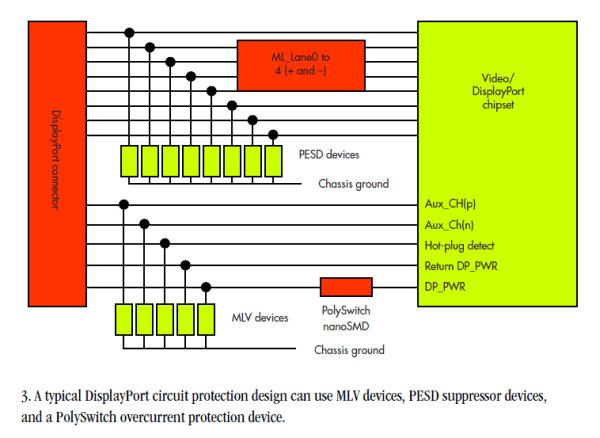 The chip, the IP4786CZ32, is aimed at digital video sources such as set-top boxes, notebooks and Blu-ray disc players.

Connecting between the unit’s digital SoC and its output socket, it protects every line on the connector and both buffers and level-shifts where appropriate.

“The challenge is that at high speeds it is very important to have matched impedances along the entire signal path,” NXP marketing director Joe Salvador told Electronics Weekly.

Although they require no buffering or level shifting, they do need transient protection.

Typically, without a protection chip, this would be handled using discrete transient suppressor directly on the PCB, said Salvador (see single diode diagram below), but even this simple arrangement has issues at 2160p 3D data rates.

Using these approaches, signal integrity is vulnerable to changes to the PCB, for example stack order or layer thickness variations.