In the world of electronic components, there are many devices out there that do their job well and reliably, but are almost never heard of – even though they may be vital to equipment that plays a role in our technology-driven lives. The radio frequency (RF) circulator is just such a device: it has simply done its job as a nondescript box of gubbins buried in radio communications systems, quietly directing radio frequency signals to the places they should go. Now researchers at the University of Texas have given the RF circulator a makeover. Not only is the new prototype smaller, lighter, and cheaper, it’s also claimed to be easily adapted to different frequencies on the fly, which is something the old style circulator cannot do.

A standard RF circulator is a three-port ferromagnetic passive device used to control the direction of signal flow in a circuit. In simple terms, magnetic fields are used to channel electromagnetic flow in a specific direction, thereby providing two-way communications on the same frequency channel by allowing, for example, two transmitters to use the same antenna. The downside, according to the researchers, is the bulk and weight of a standard circulator.

The new RF circulator uses a circuit created from inexpensive, surface-mount, active semiconductor components. The team predicts that the current prototype is just a start to the miniaturization; the size of future RF circulators may be scaled down much further to sub-miniature versions of the components on an integrated circuit. As a result, the researchers say that this should lead to improvements in cost and size and allow the incorporation of circulators in cellphones and other microelectronic communications devices that may result in faster downloads, fewer call drop-outs and clearer communications.

“We envision micron-sized circulators embedded in cellphone technology,” said Nicholas Estep, lead researcher and a doctoral student in the Department of Electrical and Computer Engineering. “When you consider cellphone traffic during high demand events such as a football game or a concert, there are enormous implications opened by our technology, including fewer dropped calls and clearer communications.” 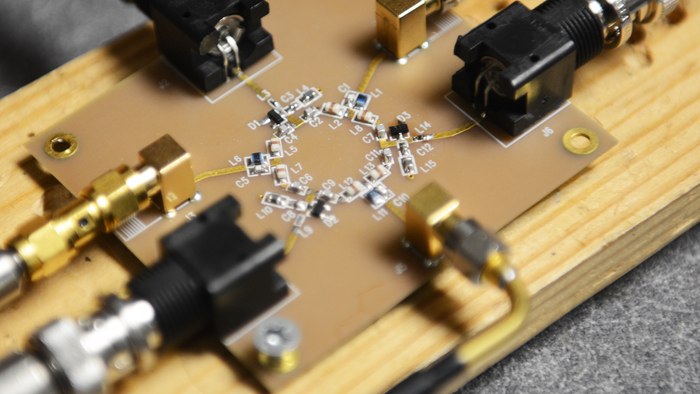 The new device is reported to work by copying the method used in magnetic circulators to route radio waves. In the standard RF circulator, a signal injected into one of three ports produces a magnetic field that flows in the direction forward of the signal. Any subsequent wave on the next port is then forced to follow the direction of the first. Something akin to stirring a cup of coffee quickly in one direction and then pouring in milk. The milk can only flow in the direction of rotation of the liquid in the cup.

In the new circulator the same effect is accomplished, but the magnetic field traveling in a ferromagenetic core has been replaced with an induced traveling radio wave spinning around the circuit of the device. In effect, the active electronic components create three symmetrically-coupled resonators whose resonant frequencies are modulated by external signals with the same amplitude to effectively “pump” radio frequency waves around the circuit.

In this project we will show you how to switch on and off the power sockets box with an IR...