We were evaluating BeagleBone Black and Raspberry Pi for low cost control systems when we discovered that the modules, as shipped, were fundamentally unusable for anything other than connecting to your PC and programming.

For instance, some of the cautions listed in the BeagleBone Black Systems Reference Manual are:


“NOTE: Do not connect 5V logic level signals to these pins or the board will be damaged.

NOTE: DO NOT APPLY VOLTAGE TO ANY I/O PIN WHEN POWER IS NOT SUPPLIED TO THE BOARD. IT WILL DAMAGE THE PROCESSOR AND VOID THE WARRANTY.

NO PINS ARE TO BE DRIVEN UNTIL AFTER THE SYS_RESET LINE GOES HIGH.”

An additional problem we discovered was that BeagleBone Black’s default operating mode utilized many of the pins present on the I/O connectors and these were not available for general use without extensive operating system changes. 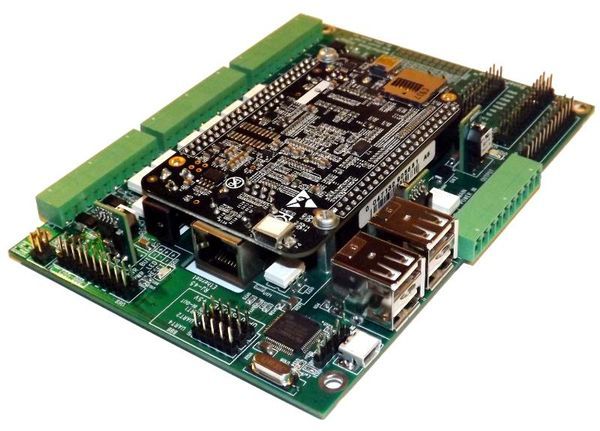 We created a multi-tool: an all-in-one 3.5″ peripheral voltage isolating motherboard for the BeagleBone Black and Raspberry Pi Model B computers and expanded out and isolated all of the default configuration pins that were not being used by BeagleBone Black internal resources.  We also created two different on-board communication links between Raspberry Pi and BeagleBone Black for advanced control functions.  Now you are able to run both modules individually or simultaneously in the real world.

After I got comfortable programming and building with an Arduino, I used my newly acquire microcontroller skills to build a...