Behold: the MorseCard! Fulfill your dreams of becoming a telegraph operator (or just make something cool to show your friends) with this weekend project. The MorseCard features a high-contrast OLED screen that will decipher whatever you tap out. I have written a variety of different sketches for the MorseCard, as the video above shows, that can do things like teach you Morse code, allow you to write out sentences without having to worry about the timing of letters or spaces, and communicate with other MorseCards using some speaker wire. 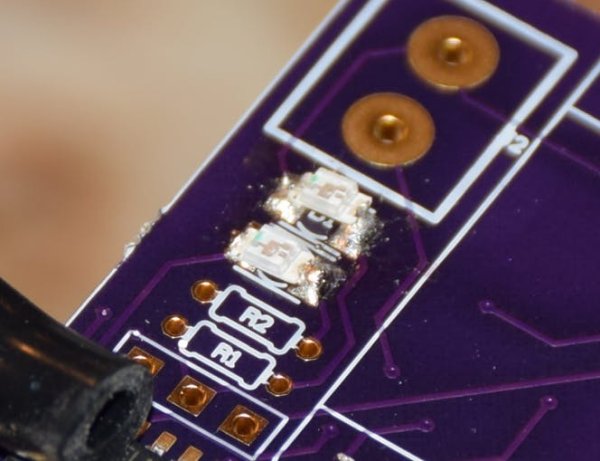 The components list has quantities that are for building two MorseCards. If you don’t want to use the communications features and just want to have one MorseCard to play with then halve all the quantities and don’t buy the speaker wire. Let’s dive in!

Step One: Ordering the Components

You can order some MorseCard PCBs using the link in the components section. They will take about two or three weeks to arrive at your door, giving you plenty of time to source all the other needed components. Depending upon what you have lying around and what you need to order each assembled card should cost around $10-$15.

If you want to customize the PCB to suit your liking you can find the circuits.io link here: https://circuits.io/circuits/5104502-morse-code-walkie-talkie-lipo#pcb

When assembling a printed circuit board I generally like to start with the hardest components and work backwards. The 0805 LEDs are definitely the hardest part of this circuit, so start on these! The diodes I linked to on Amazon have a marking on the back that tells you their polarity. The following image will help you identify your own diode:

Now that you know the polarity, you can solder the LEDs onto the pads! The side of the pads closest to the edge of the PCB is the negative side.

When soldering the LEDs I like to place some solder onto each of the pads, hold an LED in one hand with some tweezers, then use a soldering iron to melt the solder onto the LED, fixing it in place. I then add more solder to the unmelted side. I did a pretty poor job of soldering the above two LEDs in place – this was before I figured out the trick I just described.

The ATtiny is quite a bit easier to solder than the 0805s. I like to hold it in place with an alligator clip or something like that while I’m soldering the first leg in place. Align the dot in the upper left corner of the ATtiny with the corner of the PCB to ensure the pin configuration is correct.

All these components are simple to solder. The resistors, buttons, and slide switch are non-polarized, so the orientation in which you solder them doesn’t matter. For the terminal block just ensure that the openings where you can insert wires are facing outward.

The JST connector is fairly large, so it shouldn’t give you too much trouble to solder even though it’s a surface-mount component. The programming headers obviously aren’t polarized, but you still need to solder them with the openings facing the bottom of the board so you don’t block the holes for the display.

The video I linked at the beginning of this build shows what all the different sketches that I created for the MorseCard can do. One of them is a quiz, another allows you to type out sentences without having to worry about the timing of spaces or letters, and the last one allows you to connect multiple MorseCards together.

Programming the ATtiny84 is a piece of cake. If you’ve ever used the ATtiny85 before the procedure is essentially the same, just with different pins. This article explains the general setup process for the programming, except of course the ATtiny84 you are programming is soldered on. To program the SOIC variants of any ATtiny the usual procedure is to break out some of the pins, which I have done.