Morse code is used in telecommunication; it is a method of transmitting and receiving coded information. Each character (letter or numeral) is coded/represented by a unique sequence of dots and dashes. Compared to voice, Morse code is less sensitive to poor signal conditions, yet still comprehensible to humans without a decoding device, therefore, a useful alternative to synthesized speech for sending automated data to skilled listeners (radio operator) on a voice channel. 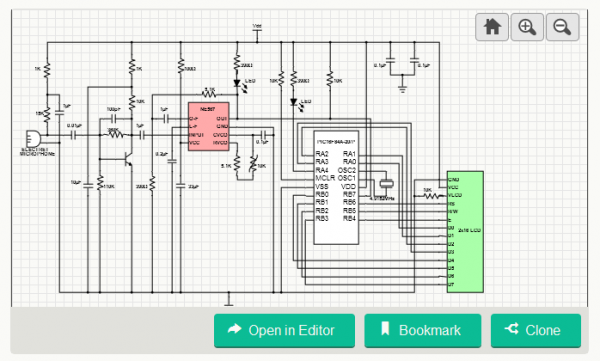 The project’s first part is composed of an electret microphone followed by a common emitter follower amplifier; this transistor amplifier also acts as a first level bandpass filter. Its band edges are determined by the size of the coupling capacitors, and the feedback capacitor between the transistor’s base and collector terminals. The next part of the project is the PLL (phase lock loop) tone detector/decoder NE567; its output is a one-zero pattern replicating the dots-and-dashes sequence of the received signal. This output drives both an input to the PIC16F84 microcontroller and an LED that is used as a receiver tuning aid.

Shadow alarms are usually used for protection against theft. A shadow alarm is a device that sounds an alarm when...