Sneel is the name of my snake / eel swimming robot. This is documentation of hardware, software and mechanical design of  Sneel_003.

Sneel is a swimming robotic water-snake, constructed to explore lifelike, sinuous motion in an aquatic robot. It is designed to navigate unknown territory and extreme terrain.

Sneel is inspired by Protei, (protei.org), an international project for the design of a fleet of open source, robotic, unmanned sailboats. Sneel is a development of Protei_007.

Sneel is an open-source, biomimetic, locomotive, aquatic robot. The electromechanical design of Sneel mimics the structure and motion of a real water snake, as a test to explore swimming behavior in an undulating linear robot. The inspiration for Sneel originates from a fascination with reptilian forms of motility and the implications of modelling hardware from biological structures and functions. Sneel uses a custom-written software library to propagate an oscillating wave down a line of servo motors that comprise the robot’s body. The current model is a platform for the development of other low-cost snake drones, with semi-autonomous navigational control for waypoint following, and sensing capabilities for obstacle avoidance. Worldwide applications for Sneel include remote marine data collection of salinity / toxicity levels, nuclear level monitoring, pipeline or underwater exploration, fishery monitoring, and oil-collection. 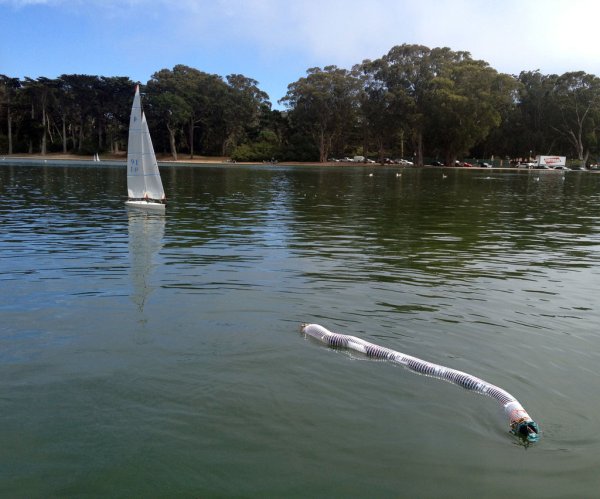 See this instructables I made about waterproofing servo motors. But briefly:
-apply silicon marine sealant around the two seams in the plastic of the servos, around the spot where the wires are inserted, and  where the screws are mounted on the bottom.
-Let the motors dry for 24 hours…-Unscrew the servo horn (the round plastic top of the servo motor).
-Apply petroleum or marine grease around the toothed shaft, and slip an o-ring around the shaft.
-Put back on the round servo horn. Make sure it is centered (turn it one direction and make sure that it rotates about 90 degrees from center one direction and 90 degrees the other direction).
-Screw back on the circular plastic servo horn.

With a hacksaw, cut the carbon fiber into 4 inch pieces (each 12″ x1″ strip should be cut in 3 parts). I used a dremel to round the jaggedy corners.

-Lay out one of each servo bracket 3 inches apart. Mark on the carbon fiber where the two large holes in the brackets line up, so you can drill here to screw them into the carbon fiber.

-Drill the 4 holes in each piece of the carbon fiber using a 3 mm drill bit, or around that size.

Step 4: Prepare the frame: attach the brackets to the carbon fiber

Using the fat screws that came with both brackets, line up the holes you cut with the holes in the brackets.

-Screw in the screws to attach the carbon to the brackets. Make sure you screw with the bolt on the backside of the brackets as shown in the photo.

-Use a pin to poke a hole in the rubber at the two hole-marks.

-Insert the 2-56 screws from the black clamp, through the rubber (pop it or screw it through), then through the red bracket.

-Do this for every black/red bracket pair.

NOTE: from the image, I did things in a slightly different order than described above – you can see my servo is already attached to the servo bracket. This made it significantly more difficult to screw in the two screws here. Also, I ended up getting 1/2 inch screws but at first I was using 1 inch screws and had to grind or cut off the excess.

Step 6: Prepare the frame: Mount the servos on the brackets

In the package with the servos, there are a few parts. Grab the small rectangle cube.

-Insert this into all four of the holes on the servo motor. Note that the rubber has a flat side. This side should be facing outwards.

-on 5 of the servos, adhere the injection molded joint (unless you have c-brackets with bearings in the bottom)

-Place the servo in the bracket as shown – the servos with the injected molded joint go on the black servo bracket.

-Screw in the 4×40 screws. Place a lock nut on the bottom and screw in the bolt.

Step 7: Prepare the frame: Mount the c-bracket pairs to the servo brackets

Step 8: Screw in the servo horn to the bracket

line the holes up with the brackets and the servo horn.

-Make sure that your horn is centered (you can spin it in one direction and the other direction, then bring it about halfway back turned, to the center position, so if you put your bracket on aligned straight with the servo it will be calibrated to center position.

-use a small screwdriver to screw the bracket and the round plastic servo horn together. I like to pinch them together with pliers to make sure holes line up.

The brackets and servos should rotate freely. You should apply some grease between the two metal brackets if there is friction.
You can also apply loctite to some of the screws so that they dont come out. Make sure not to do this before you are certain you are finished, because it is very hard to undo the screw once you’ve applied loctite. Also, the green loctite is a little less permanent.

At this point, your snake body is ready!

-Insert the xbee onto it.

-I’m using a servo motor shield from seeed studios, but I am sort of just using it as a perf board, but a convenient one because all the ground and power pins to my servo motor are already jumped together, with a screw terminal for the battery input. And ignore those wires hanging off the board – I had previously soldered on female header pins for another use of the board, so I removed them so I could use this here. I eventually clipped them off but you can see them in the pics.

-So if you have the servo shield, solder on the screw terminal; two rows of headers  where the 6V and GND from the battery are connected. Solder on male headers so it will mount in your seeeduino (or Arduino) mega. I’m using the seeeduino again because i had it around, and because it is smaller so it fits better into the skin tube  (the protective outer layer).
Note: an Arduino mega is necessary not because of the numbers of outputs but because the flash memory space in the Arduino UNO is not large enough.

-Solder on wires from all the digital output pins (as many servos as you are using).
-place on the servo connectors (Red, black, white here) and insert the dOUT wires from Arduino into the servo cables (white signal wire).
NOTE: if Arduino is to be housed in the frotnt of the snake, connect the pins low to high from Arduino to the servos that are most close to the head to far away) . in other words: the first servo (as in when the snake is moving ahead, the servo at the HEAD) should be digital pin 2, and the tail end servo should be digital pin 11.

-Screw in wires to the screw terminals to attach to 6V and GROUND from your batteries.

-I clipped the extra metal off (you shouldn’t have to do this if you are starting from a clean board, not one with female header pins soldered in)

I wrote a software library to easily generate wave locomotion based on oscillation. It calls on the Servo Arduino library to generate a sine wave propagating down the line of servos. It allows for modularity to change the sensory input, wave parameters, and number of servos. Download the code here. Upload it to Arduino, without the xbee plugged in (when the xbee is plugged in, the tx and rx pins (pins 1 and 0) on Arduino mega are used references a class that propagates a sine wave down a line of motors.

During each loop cycle:
-The main program, references a class that propagates a sine wave down a line of motors.
-listens to a wireless RC protocol communicating to the snake via the joystick 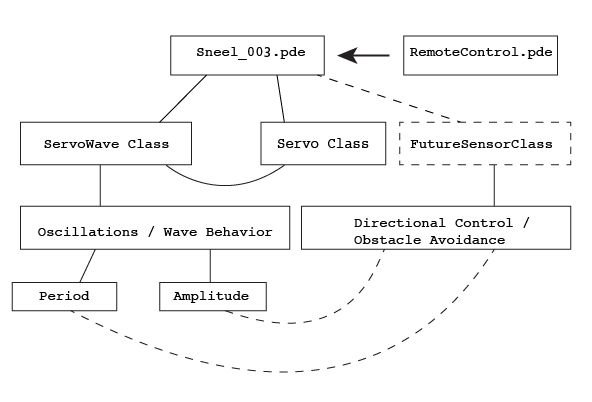 // check if the pushbutton is pressed.