After seeing all the different instructables for Led cubes I was still left with a lot of unanswered questions.  So after reading everything I could find this is what I got. I decided to make the instructable after building it…so ill try to recreate the process the best I can.

This cube is different from others for many reasons:
1. It connects directly to your Arduino.
2. It uses few components, so its relatively inexpensive.
3. Runs on code that’s easy to write. or you can use the ones provided.
4. Everything can be bought at your local Radio Shack

In all the cost of this cube is relatively low at around $100 (according to where you get your parts)
the Arduino was the most expensive part at around $60 For MEGA and I think a UNO is around $30.
So if you already have a Arduino the cost is brought down to $40. 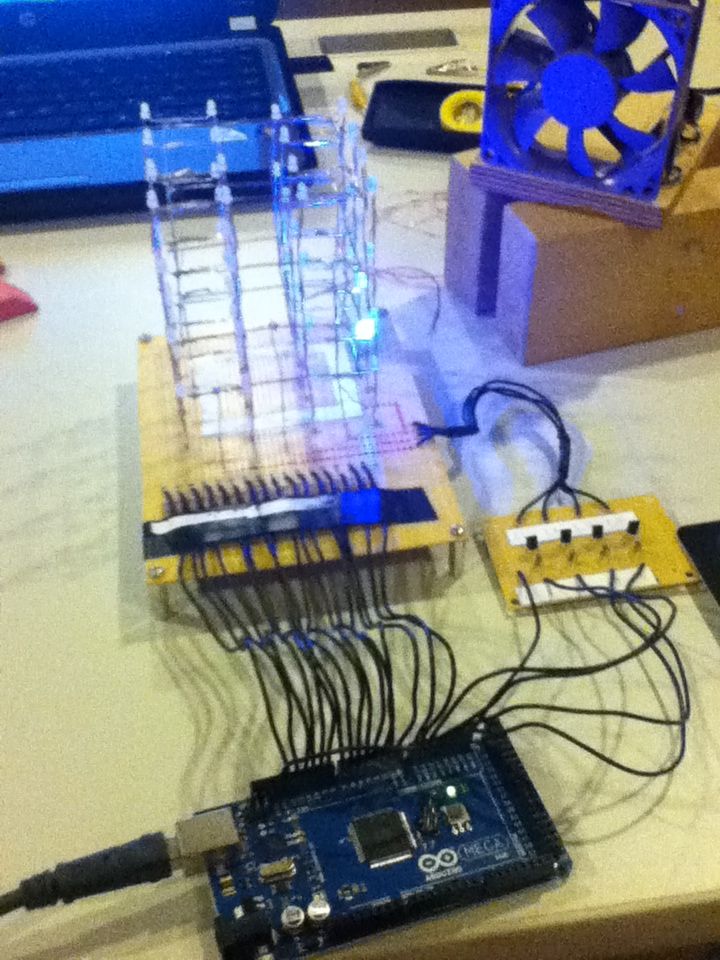 The first thing you must do is make the cube.

If you look at the pictures of mine the LED’s are not all just soldered to each other.  This is because I actually made all the wiring and circuitry when I was waiting for my LED’s to get here from China….(Note that it takes about two weeks for the lights to get to you).
Therefore when Finally got the LED’s they were a lot smaller than I anticipated, and I did not want to redo my circuit board, so I just made frames out of craft wire to hook all the cathodes to.  After I started to do that I then realized that it would the be shorter than it is tall making it a rectangle rather than a cube.  So that’s when I added the vertical columns of wire to solder the anodes too.

To begin the Construction of the cube use a drill with the proper size drill bit to make holes in a piece of wood.  draw a grid to the size of the cube you want. (this is determined by how long the leads are on your LED’s.

Your going to want to test you LED’s before you solder them into place because it would be sad if you put your cube together and had one in the middle that didn’t work.  I’m sure they would be pretty hard to replace. So just use a 3v battery between the two legs of the LED. (long leg is positive, short is negative)

To solder all the LEDs together I used alligator clips to help hold everything together.
As I said before, I decided to to this after I built it, so I don’t really have any pictures of the building process.
However the pictures below are exactly what it should look like.  These are from Chr’s instructable for his 4x4x4 cube.  Also there is additional information on his that may not be included on mine.  So go read his too.First make all four layers, then solder the layers together. 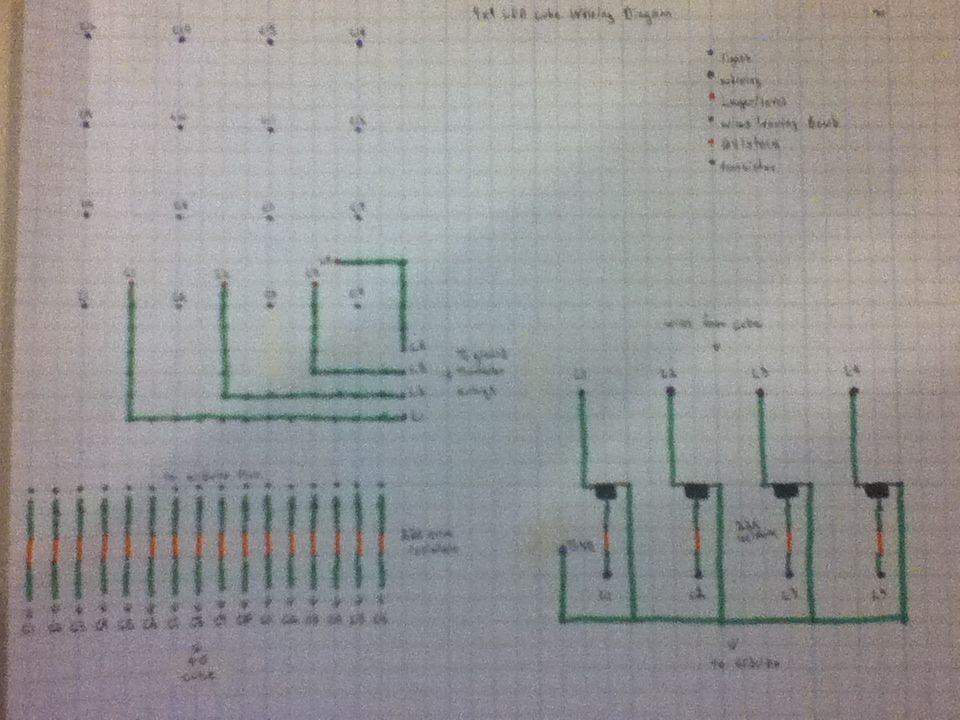 The circuit is pretty simple. Each of the 16 columns will connect to a pin on the Arduino through a current limiting resistor. Each of the four levels connects to ground via a NPN transistor when activated by an Arduino pin.

I drew these drawings if you can understand my way of labeling.

NOTE: The transistors are only necessary for some of the codes out there. If you plan on writing your own like i did you can skip this and plug the four ground layers directly into the Arduino!