The basis for this tube preamplifier started out as a post in the Super simple single stage tube preamp thread on the website Forum. 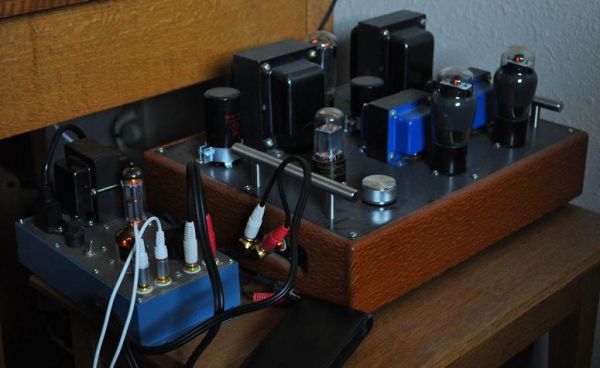 One of the members (see Mark’s 4S Universal Valve Preamps) had suggested building a Super Simple Single Stage Preamp (“4S” Preamp for short) and there was much discussion concerning various tubes, gain, noise, etc. and several designs were presented using various dual triode tubes. Then the proverbial gauntlet was thrown down with the phrase “switch from 12AU7 to 12AX7”. My answer was to design a universal line stage preamplifier that would work well with an entire range of tubes. Thus was the 4S Universal tube preamplifier born.

The tube preamplifier circuit is actually very simple. It uses a reasonably sized grid stopper to control clipping and bias excursions, a pure restive load, and a high impedance grid resistor to avoid loading virtually any driving device. The volume control (P1 on the schematic) is on the tube output to help ensure that the noise figure for this Hi-Fi preamp is as low as possible. The input resistor (470k on the schematic) can be anything from 100k to 1M to properly load your input source. With these components (the output potentiometer is 250kΩ audio taper) and an optional 33µF cathode bypass capacitor the calculated preamplifier performance is shown in the following table.

As can be seen from the calculated performance, the peak gain can be varied considerably by choice of tube and the distortion (virtually all second harmonic) is very well controlled. This is a well behaved line stage preamplifier.

For more detail: 4S Universal Preamplifier for 12A*7 Tubes