Skip to content
Ever wonder of copypaste method, usable in real life, not only in virtual reality? Me too. It is  21th century, and those are nearer than most of all can imagine! This is possible thank to 3d scanners and printers. So let’s try to scan something!

First of all, sorry for my English skills. It is not my native language, I have learned it at school, but don’t have many occasions to use it, except of reading articles in English. But i hope it would be good enough to understand.

-one Arduino with Arduino IDE
-one Processing IDE
-a lot of LEGO (best toy ever!)
-one stepper motor
-one Stepper motor driver and power supply
-one linear laser
-one webcam
– one working Meshlab
and Some help 🙂

First, you need to get all parts and think about overall look and working method.
And it depends the most of type of stepper motor you can get. I got my stepper from old OKI printer, which has attached gear set. It was very useful, because i could attach Lego pulley, without destroying it permanently. In a fact, i hadn’t destroyed any Lego blocks during build of rotating platform. I hate destroying things.
Code is primitive, i know it. It has major mistakes, not all needed algorithms are applied. But it generates point clouds, which are very similar to real things and that was goal of this alpha version of scanner. 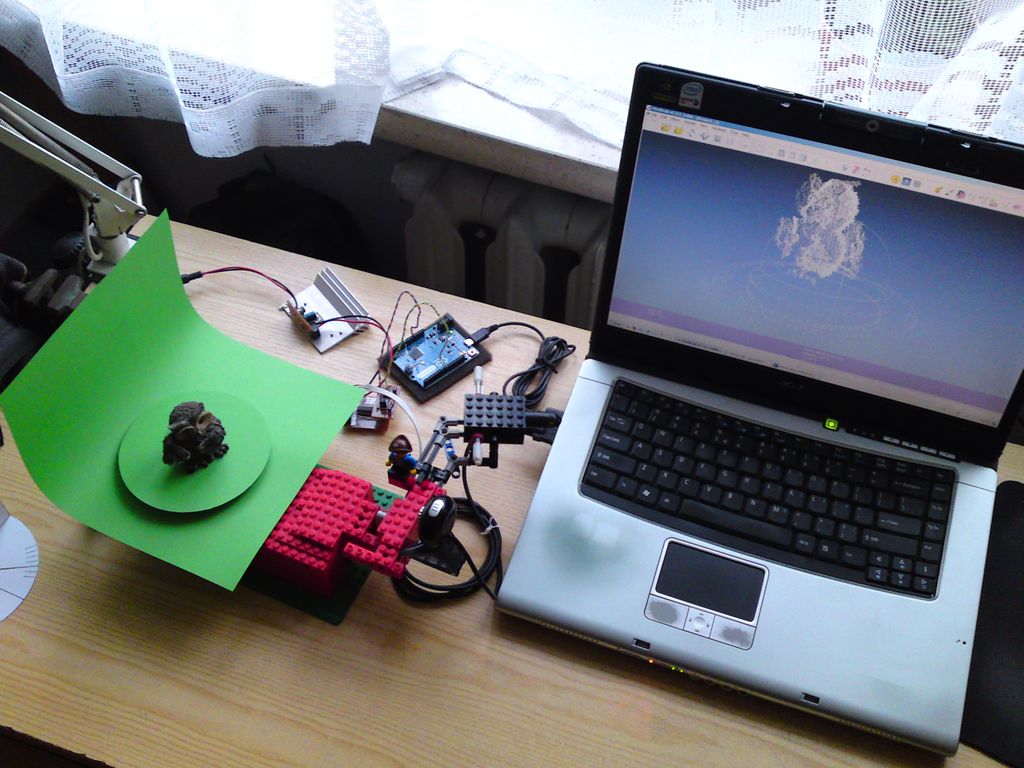 How does it work?
We have to found Cartesian coordinates (in some space) of points which belongs to scanned object.
Basically, we are looking for distance, between rotation axle and a point marked red by laser (“ro” on the picture). To found this, we have to measure how many pixels are between optical axle of camera and laser-marked point. On picture, this distance is marked as “b”. When we get that information, we have to convert it into millimeter (how many pixels are in one millimeter). Angle between laser and camera axle is constant and equals “alpha”. Using simple trigonometry, we can calculate “ro”:
sinus(alpha) = b / ro, which means that ro = b / sinus(alpha)
This operation repeats every layer, in my case it is 480times. Then rotating platforms move by some angle and whole operation repeats.

Let’s move to second picture.
Previous operations gave us coordinates in polar coordinates system. In polar system, every point look something like that:
P = (distance from Z axis, angle between point and X axis, Z) which is P = (ro, fi, z).
Ro is our distance, measured in previous operation. Fi is an angle of rotating platform. It grows an constant amount, every time platform rotate. This constant amount in equal 360 degree / number of operation
I.e. for 120 profiles around object, platform moves about  360deg / 120 = 3 deg. So after first move, fi = 3, after second fi = 6, after third fi = 9 etc.
Z value is the same value as Z in Cartesian system.

It is 4-connector bipolar stepper motor from an old OKI printer. It has 48 steps per revolution (7,5 deg per step), driven by 3,7V power supply. Integrated gear has 6:1 ratio, which means i had  6*48 steps on the output. It takes 200-250mA when moving.
I soldered 4 wires to connectors of stepper motor. To another ends of wires i have soldered single gold pin. Now it is very easy to connect it with driver.
I attached Lego pulley to the integrated gear. I took it out and drill 6 holes. Holes has same size and arrangement as holes on Lego pulley. Pulley and gear are joined together with „3-long” shafts.

Driver:
Bipolar stepper is driven by h-bridge. Because of low power consumption of stepper, L293D is more than enough. In simplest variant, h-bridge uses 4 digital output pins from Arduino, +5V and GND. For reducing output pins to 2, You can use small, additional board.
More info can be found in Arduino reference and on Tom’s Igoe page: http://www.tigoe.com/pcomp/code/circuits/motors/stepper-motors/
Ready to termotransfer boards and schematics are attached below.
Parts:
Part     Value          Package   Library             Position (mil)        Orientation

Power supply:
Power supply for stepper is super-simple LM317 application. Schematic can be found on datasheet. Using potentiometer, i can set voltage to needed level (3,7V in my case).
Parts:

Lego part! My stepper was cased by Lego, so it has no chance to move. I didn’t need to use screws, glue, etc. Momentum is transferred to platform by rubber band and pulley same size as the one on motor (ratio 1:1). Then it is connected with another axle by 20:12 gear set. All of this causes overall ratio 10:1, which means i need exact 10 full revs. of steeper for one revolution of platform. Platform was made of CD glued to broken Lego wheel (it was very poor series of Lego elements, thin plastic causes A LOTS OF brokes during normal play…). CD is covered by green paper, glued by 2-side sticky tape.
Pic is worth more than thousand words?

I used very primitive Creative Webcam Vista. It’s rather old, it has poor sensor (640×480), it has poor optics (plastic lenses). But it has one advantage. I have already had it. It is also attached to rotating platform (little to low, need to change that soon).

Poor quality (~1$) laser pointer is attached to cylindrical lens made from glass rod. This kind of glass rods are used in chemistry labs. Laser and lens is cased in Lego case (cased in case; thank you Captain Obvious…). Laser is turned on by rotating it a little bit, button is pushed by Lego. Also attached to platform. Angle between optical axle of camera and laser are around 30degree.

I owe Arduino Leonardo only, so it was only choice i’ve got.
It has simple code, which causes rotate stepper when got command from Procesing. Commands are sent by Serial.
I chose 4 steps per phase, which means i got 120 photos and 120 profiles around object, every 12 degree. Less steps causes mistakes because of elasticity of rubber band.
It is using arduino’s standard stepper library. 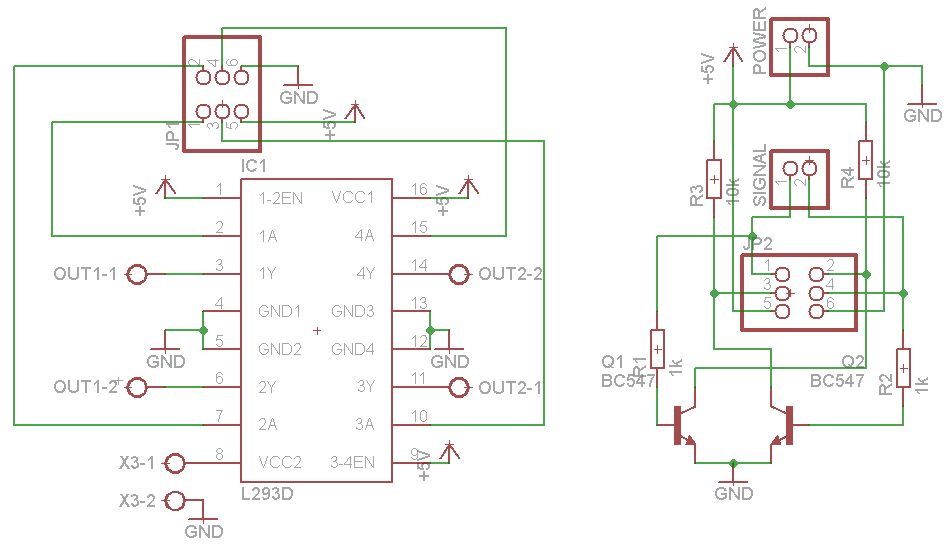 #include <Stepper.h>
Stepper oki(48,8,9); //see stepper tutorial in arduino.cc for info about that
const int ledPin = 13; // the pin that the LED is attached to
int incomingByte;      // a variable to read incoming serial data into

Why Processing? Because it is easy to use, with big reference and tutorial base. Also it is very similar to arduino. That means the probability of mistake during code writing decrease. Libraries are well documented also.

For more detail: Let’s cook: 3D scanner based on Arduino and Processing