This is something we have really been meaning to write up. A few weeks ago we ripped out an RGB LED from an old Canon Scanner that was laying around and going to waste. Since then we’ve been playing around with the RGB LED element and decided to put it to good use.

We have come up with LANp – This is an Arduino and Ethernet Shield that controls an RGB LED colour real-time with a Javascript colour picker.

Take a look below for the YouTube video of this working at the bottom of the page. 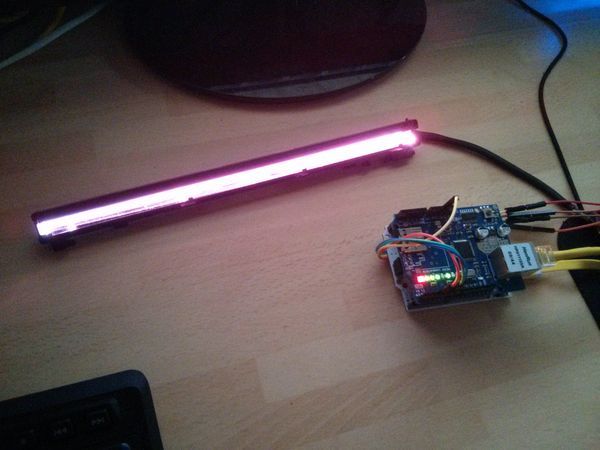 This webserver code is based on our previous article, located just here which shows how to set up an SD Card based web server and serve files over a network, with support for AJAX requests.

The LED Scanner bar we have is an QK1-4761 from a Canon PIXMA MP620 – At the time of writing this post there are a few listed on eBay for around £7.

We started by soldering wires on to the pads of the scanner LED. See the photo below, you may have to do some experimenting to find out which is which, but normally there is an R G B and +v pin. This LED operates at 5v (that doesn’t mean yours will though!)

As you can see on the photo to the right; we just soldered wire directly to 4 of the 5 pads – The bottom one isn’t used and the next are R G B +5v going upwards.

Make sure that none of the wires, or soldered joints are touching each other as this will skew the colour of the LED dramatically. It may be worth taping this up after soldering to avoid the wires touching when you’re moving the LED around.