In this tutorial, we’ll see the advanced feature of interrupt debouncing using Zerynth. 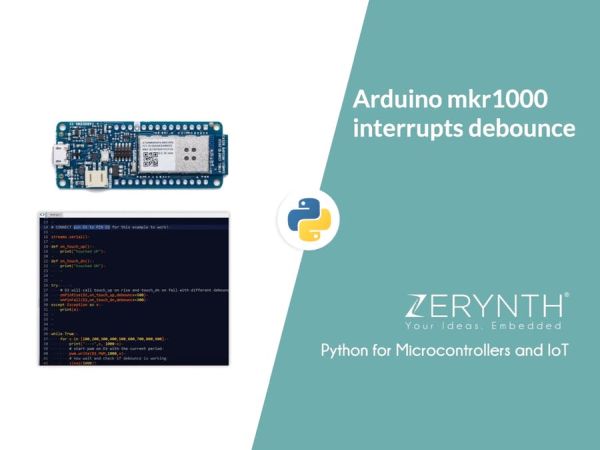 In this tutorial, we’ll use PWM to show the advanced feature of interrupt debouncing. PWM triggers fall and rise events at different speeds, but interrupts are triggered only if the debounce time (the stable time after and event) is in the correct range.

We’ll use Zerynth Studio to program the microcontroller-based board in Python.


Zerynth simplifies and speeds up IoT development allowing programming in Python or hybrid C/Python the most popular 32-bit microcontrollers and connecting them to the leading Cloud Infrastructures like AWS, Google Cloud, Microsoft Azure, IBM Watson, Ubidots, and many more.

You need a board. You can select one of the 32-bit microcontroller devices supported by Zerynth. We’ve chosen the Arduino/Genuino MKR1000 (read Zerynth documentation here).

Zerynth Studio, a powerful IDE for embedded programming in Python that enables the IoT. You can download it here.

Connect pin D2 to D3 with a jumper. See the schematics.

Once you have installed Zerynth Studio and created a Zerynth user, you have to register and virtualize the board.

Clone and uplink the Zerynth example “Interrupts Debounce” as shown in the video. Open the Serial Monitor to see the interrupts printouts.

debounce and time_unit are used to define a timeout such that fun is called only if pin stays high for all the duration of the timeout.

Creating a Smart Water Sensor with the ESP32 Thing

Over the Christmas break, my parents were out of town to celebrate the holidays. When they came back, they saw...