Continuing from my Intro to Arduino post, this Instructable will go over some slightly more advanced topics with Arduino, specifically relating to controlling and managing many inputs and outputs. The next class covers how to connect the Arduino’s inputs and outputs to MIDI. 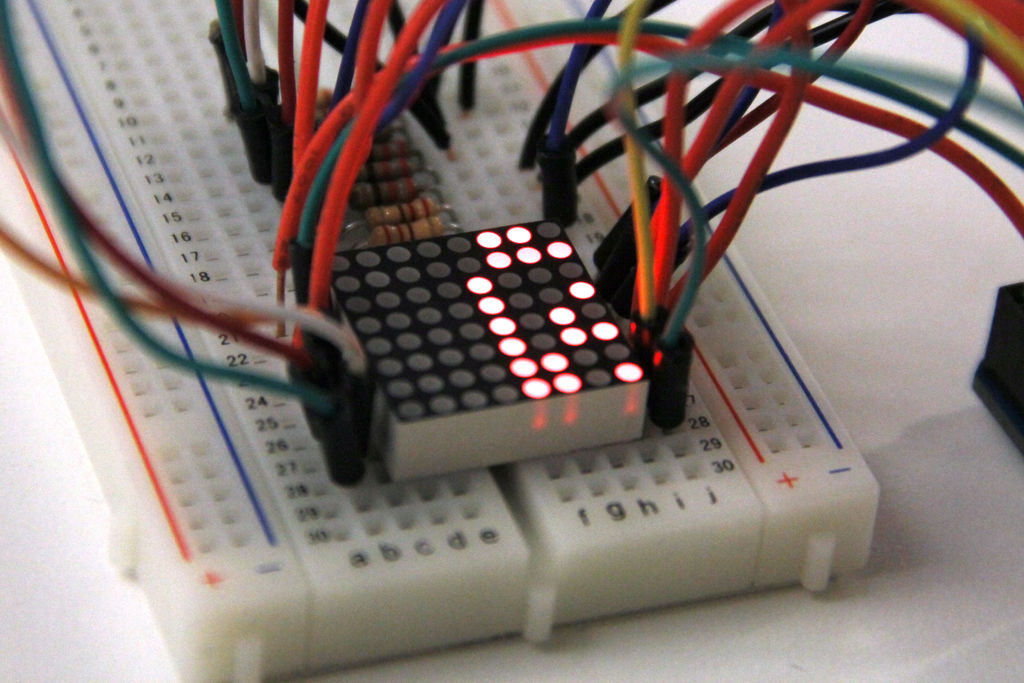 Sometimes using delay() is not a great option because the Arduino can’t perform any secondary tasks while the delay is happening. Imagine we wanted to blink an LED and detect a button press at the same time using delay():

In the code above, we are only measuring the button once every two seconds, so it may take up to two seconds before a button press is detected, and very brief presses might not ever get detected at all.

millis() gives us control over when events happen without putting pauses in the sketch. Each time we call millis() in an Arduino sketch, it returns the number of milliseconds since the Arduino was turned on.
Run the following code to see how millis() works:

Here’s how to use millis() to blink an LED without using delay().

The sketch above introduces a few new things:

unsigned long is another data type (so far we’ve seen int and boolean). Unsigned long is like int, but larger, I’ll explain… Each data type requires a certain amount of space in the Arduino’s memory, and the amount of space that the Arduino frees up for a given variable dictates the min and max values that the variable can store. For example, int’s can range from -32,768 to 32,767, if you tried to do something like this:

You would end up with a very strange bug in your code. This may seem like an arbitrary range, but it comes from the fact that int’s require 16 bits of space in the Arduino’s memory, and with 16 bits of binary you can store numbers from 0 to (2^16-1) = 65535. But people decided that int should be able to store negative numbers too, so one of the bits in the 16 bit number is used to store the sign (positive or negative) and the remaining 15 bits store the value : 2^15 = 32768. Including 0, we end up with the range -32,768 to 32,767. Another data type called an insigned int does not store sign, so it gets the 0 to 65535 range that I calculated before, but you cannot store a negative number in an insigned int.

There is no larger data type for storing numbers than long, so if you need to store a number larger than 4,294,967,295, you’ll have to come up with a different way to store it (maybe the first 9 bits in one number and the last nine in another?). This limitation has some interesting consequences for the millis() function. Since millis returns unsigned longs, and it’s constantly counting up in milliseconds, millis() will actually reset back to zero once it reaches:

If you use millis() and you plan on keeping you project running for extended periods of time without ever turning it off or resetting, you should be mindful of this.

One more comment about data types: We could have been using long’s or unsigned long’s this whole time when we declare pin numbers or other variables in the example sketches so far, but generally it’s a good idea to use the smallest data type possible for a variable, that way you have plenty of extra space in the Arduino’s memory for other things. In Arduino, longs are rarely used, but millis() is a good example of when they come in handy.

Getting back to the sketch, the general idea is to store the last time you toggled the LED on or off and compare that with the current time returned by millis(). Once the difference between those two times is greater than some interval, you know it’s time to toggle the LED again. To do this I’ve set up some new storage variables:

currentMillis is an unsigned long representing the current time that is updated each time the Arduino’s loop() function starts. (currentMillis – timeOfLastLedEvent) gives the time sine the LED’s state was last changed, we compare this against the intervalOFF to see if it’s time to turn off the LED, if it’s not the Arduino will keep updating currentMillis and re-checking until it’s time.

Continuing from the button debouncing I introduced in my last Instructable, we can use millis() to debounce buttons without using delay():

In this code, I’ve added some new storage variables:

debounceInterval is the amount of ms to wait for the button pin to settle before we know for sure what state it is in. I’m my last example I’d been using 1ms, here I’m using 20ms.

timeOfLastButtonEvent is similar to timeOfLastLedEvent in the last sketch, it gives a time to compare with currentTime so that we can count how many seconds have passed since first detecting a button press.

We reset timeOfLastButtonEvent each time currentState does not equal lastState:

}
Once enough time has passed without needing to reset timeOfLastButtonEvent, we know the button has settled into a debounced state:

Then we can update the current stored debounce state if it has changed, and if so, trigger an event according to the new debounce state:

Shift registers are chips which use logic gates to control many inputs or outputs at once. They are inherently digital, like the digital pins on the Arduino – this means that they can only read or write 0V and 5V (LOW or HIGH). If you are looking for something to expand your analog inputs then you’ll want a demultiplexer like the 4051 (read more about how to use that here). In this Instructable we’ll be looking at the 74HC595 shift register (called the “595”), it’s very popular because it can expand 3 Arduino digital outputs into 8 outputs.

The 595 has 8 output pins labeled Q0-Q7 (sometimes also called Qa-Qh), it cannot read data from these pins, they can only be used as outputs (if you are looking for a shift register with 8 input pins, check out the 74HC165, tutorial here). The 595 is controlled by three connections, they are called the data pin, latch pin, and clock pin. Refer to the flow diagram above to see how to control the output pins (repeated below):

Next we’ll take a look at the 595’s data sheet to find the right pins to connect to. This first image above shows the 595 pin connections. There are 16 pins on the 595, labelled 1-16. Notice the half circle marking on one side of the chip, the #1 pin is always located on the left side of this chip. The rest of the pins are numbered around the chip going in the counterclockwise direction.

Now connect an LED and a resistor to ground to each of the 595’s eight outputs pins. Your circuit should now look like image 4. Now setting an output pin of the 595 HIGH will turn on the corresponding LED, and setting it LOW will turn the LED off. Upload the following code:

This code introduces a new data type called byte, byte is like int, but since bytes only require 8 bits of memory, they only store numbers between 0 and 255 (2^8 = 256).

The rest of the code is straightforward, except for the line: 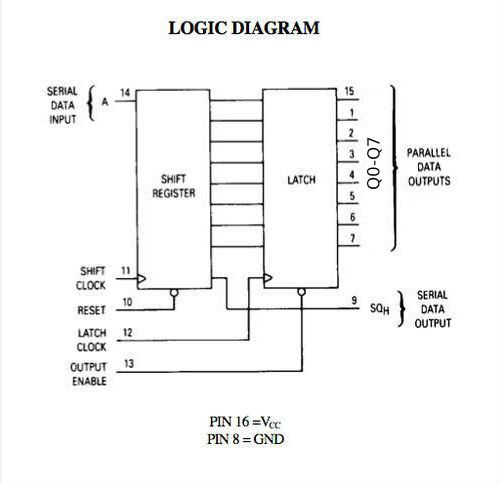 Now try other numbers, the number 15 is binary is 00001111, you can find other decimal to binary conversions on google by typing a # then the phrase “to binary” (the number it spits out will start with 0b, ignore that part and grab the last 8 digits). Remember that we can only send binary numbers with 8 digits in them (8-bit) to the shift register because it only has 8 output pins, so the value of numberToDisplay must be between 0 and 255.

Now you’ve turned your LEDs into a binary counter: