How to Interface GPS with Arduino 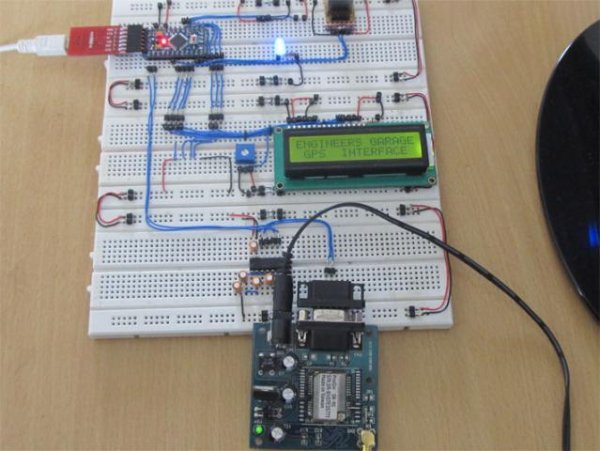 The GPS module continuously produces a set of data regarding the position of the earth surface where it is situated which includes the current position with respect to the equator of the earth in terms of Latitude and Longitude. This data can be decoded and printed into the readable format with the help of a microcontroller only. In this project the data regarding the geographical coordinate is extracted from the GPS output with the help of the Arduino. The Arduino can be used as a stand-alone board of which the output or inputs can be taken from the boards or given to the board. They can communicate using standard communication ports like USART, TWI, SPI etc. which enables them to be connected with various kinds of devices. The Arduino board is designed for easy prototyping and the IDE used for coding is very simple and provides so many libraries for interfacing with common external devices.

The GPS module used in this project is SR-91 based GPS module which can communicate the data regarding the current location to a PC or microcontroller through the serial port.

The arduino board used in this project is the arduino pro-mini board and the IDE version of the arduino is 1.0.3 for windows.

It is assumed that the reader has gone through the project getting started with arduino and tried out all the things discussed there.

Using the function Serial.read() the Arduino continuously reads the data from the GPS module, looking for Latitude-Longitude details. The GPS send the data in standard NMEA format which consist of the real time data regarding the current position. The format includes so many sentences and among them one particular sentence referred to as “Global Positioning System Fix Data” is extracted to read the Latitude Longitude.

The screenshot of the “Global Positioning System Fix Data” among the NMEA format data output from the GPS module is shown in the following image; 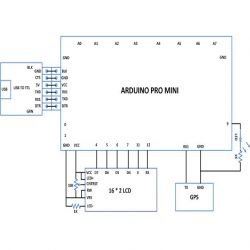 Each sentence has a sentence identifier, actual data separated by commas and a check sum which has to be extracted to make it in readable format. The details of the sentence “Global Positioning System Fix Data” is given in the following table;

To simply output the Latitude-Longitude coordinate using the Arduino, the code written for the project continuously reads the characters from the GPS module and check them for two consecutive ‘G’ s, so as to get the sentence starting with $GPGGA. Once the message is found the code seeks through the message, skipping the letters till the first two commas and printing the rest as the Latitude, till the following comma. The code again skips the characters till it found another comma and the following letters till the next comma are printed as Longitude.

For more detail: How to Interface GPS with Arduino

Arduino Project – Touch Me Not I modified the Arduino project from the Arduino Starter Kit (Touch Sensor Lamp). Now...