I bought this skull to decorate my computer desk. However, analyzing better, I could do something more interesting.
I hope you enjoy. 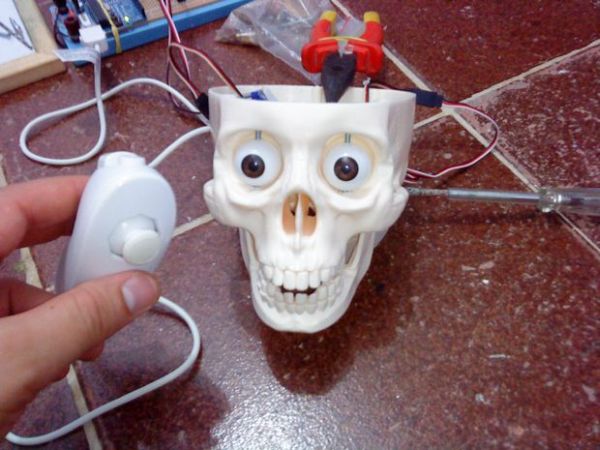 – Microcontroller (I used an Arduino board);

– A nunchuck (for nintendo wii control) with a adaptador

Note: I bought the adapter but can be easily made by following this step by step: http://www.instructables.com/id/Wii-Nunchuck-Adapter/

– Batteries (attached to the computer, use the power from usb);

If the skull comes disassembled (like mine), mount it by following the manufacturer’s instructions.
i detachedthe teeth and fixed then on the jaw. Note: I tried to use the most of the stuff I bought. Then I used the disposable part where the teeth were fixed.
The brain was not used because in his place will be the servos and the microcontroller.

nspired by Achmed the Dead Terrorist, jeff dunham´s puppet, I decided to make the eyes move only sideways. Thus, it would be easier to assemble. Just increase the hole is in the eye with the aid of a drill.

The skull has two holes where the eyes are to fit a screw. Take care to drill the more centralized as possible because his skull will get a bit cross-eyed. In the eyes, has a “beak” that i had put one screw. For the eyes move, two holes were opened with a drill so that the rods made with the screws behind the eyes to move from one place to another. That done, I made a guide to uniting these rods, temporarily with a popsicle stick. The result was very good.

Now just put the servomotor and make linking a guide to terms with the eye movements controlled.