The goal of this project is to create a low resolution display of graphical art that interacts with people who are handling it. My basic idea is to create such a “magic box” with a LED matrix on one side. It should be small enough that it can be held by hands. Also, it has to work independently from a computer, so that it be carried around. “(It will be best if the series of graphics generated by the user can be stored somewhere.)”

The basic design of input and output are the following: 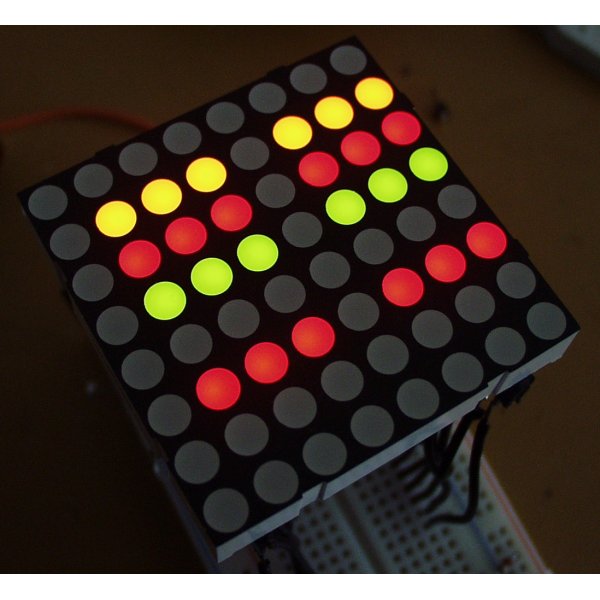 I found one with dual-color(red and green) LEDs ($4.5). With different intensity, we may get a range of pleasant colors including orange and yellow. The matrix height is 3.2in, which is the biggest among other 8×8 LED matrices with reasonable price that I could find.

LED display drivers lets you control individual LEDs easier. My two choices are either MAX7219 or MAX7221($7.02 a piece). They can drive either 64 individual Led’s, or up to 8 digits of 7-segment displays. The big advantage of these drivers are that they can be controlled from the Arduino using only 3 of the digital output pins. There are also examples on driving a dual-color matrix using 2 such drivers. On the other hand, the limitation is that I couldn’t use PWM(Pulse Width Modulation) to control the intensity of individual LEDs. For the dual-color LED, with PWM, I could virtually get 255*255 colors; I can only set 4 states: off, R,G,RG without PWM.

Most Arduino projects uses MAX7219 and MAX7221 interchangeable, while I think in my case MAX7221 would work better because of the following reason:
“The MAX7221 was designed for reduced electromagnetic interference (EMI). EMI could lead to some jitter in the readings from the analog inputs of the Arduino or if the Led matrix is placed near some audio circuit it can introduce audible noise to the signal. So, if your project would go into categories like : audio gadget, audio levelmeter, (low-)voltage measurement, etc. than better take the MAX7221. “[4]

Since my project also has analog input to sense acceleration, I’m afraid that EMI may prevent me from getting correct input from the accelerometer. MAX7219, MAX7221: Serially Interfaced, 8-Digit, LED Display Drivers

ADXL32X accelerometer with breakout board

My first choice is ADXL322, a dual-axis accelerometer (measures acceleration along x and y coordinates) with sensoring ange from -2g to 2g and analog output 0-5V. It costs about $7.95 a piece. SparkFun also sales ADXL322 breakout board. The breakout board will save a lot of wiring effort, however, it will cost $29.95, 3 times as pricy as the accelerometer alone.

The following schematic diagram shows input/output connections from Arduino to two tilt switches and one 8*8 Green/Red LED matrix. To start with the simplest case, I will treat the LED matrix as 4*4 with single color (only use 16 green LEDs at the 4 corners of the matrix).

The assembly program will constantly read the status of the 4 pins that are connected to the switches, and copy the status into a reserved space in memory every tenth of a second (or other interval of time). For example:

In this way, the program can remember past status. If the status doesn’t change for about 10 seconds, the program will send the last 100 status from memory one after another to the arduino, which modifies the value of the 4 input pins. Then the arduino is able to ‘playback’ the LED interaction generated by the user.

The arduino program will be based on arduino-loop.pde, which uses a loop to constantly response to commands from the PC, such as “w d 13 1”, or “r d”.

Modifications to this part will be:

This will be in the same loop as the communication. For testing purposes, I will reuse the code from the sketch I wrote for hardware testing: turn a row of LEDs on or off base on the status of the switch. This is simple but enough to create a series of patterns that will be regenerated later. Since priority is given to the assembly part, I will only implement the artistic side of the LED controls as time allows.

preventing conflict between assembly and arduino

When arduino is replaying past status, the LEDs shouldn’t respond to motion. Therefore, I will add one more operation “p” , which alters the value of a boolean variable. The code for reading from the 4 input pins will be executed only if this boolean variable is false.

Arduino-serial.c will be used to connect the assembly to Arduino. The only change will be not printing the content of buffer to screen when “r” option used.

In an endless loop with a short delay in every cycle: 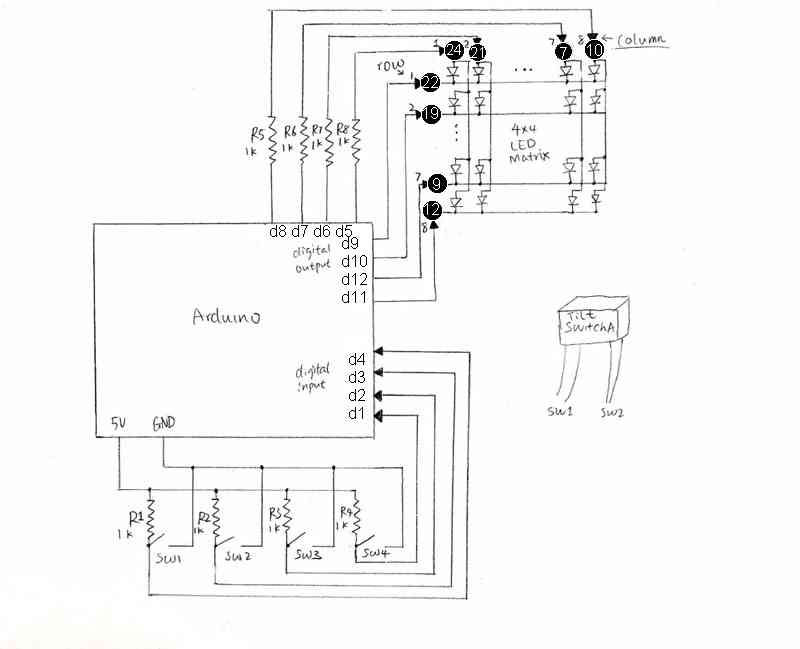