HOW TO PROGRAM A REALLY CHEAP MICROCONTROLLER

There are rumors of a cheap chip that does USB natively, has an Open Source toolchain, and costs a quarter. These aren’t rumors: you can buy the CH552 microcontroller right now. Surprisingly, there aren’t many people picking up this cheap chip for their next project. If there’s no original projects using this chip, no one is going to use this chip. Catch 22, and all that. 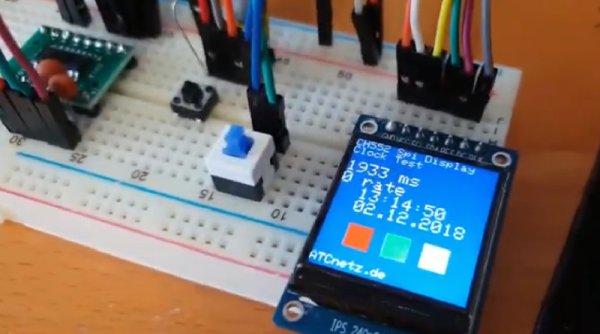 Like a generous god, [Aaron Christophel] has got your back with a working example of programming this cheap chip, and doing something useful with it. It blinks LEDs, it writes to an I2C display, and it does everything you would want from a microcontroller that costs a few dimes.

The CH552, and its friends the small CH551 all the way up to the CH559, contain an 8051 core, somewhere around 16 kB of flash, the high-end chips have a USB controller, there’s SPI, PWM, I2C, and it costs pennies. Unlike so many other chips out there, you can find SDKs and toolchains. You can program the chip over USB. Clearly, we’re looking at something really cool if someone writes an Arduino wrapper for it. We’re not there yet, but we’re close.

To program these chips, [Aaron] first had to wire up the microcontroller into a circuit. This was just a bit of perf board, a resistor, a few caps, and a USB A plug. That’s it, that’s all that’s needed. This is a fairly standard 8051 core, so writing the code is relatively easy. Uploading is done with the WCHISPTool software, with options available for your favorite flavor of *nix.

READ  FOUR ON THE FLOOR FOR YOUR VIRTUAL RACE CAR

If you don’t feel like soldering up one of these yourself, there are some suppliers of CH554 dev boards, and the files for [Aaron]’s projects are available here. Check out the videos below, because this is the best tutorial yet on programming and using some very interesting chips that just appeared on the market.

Source: HOW TO PROGRAM A REALLY CHEAP MICROCONTROLLER

We have a great deal for Arduino fans in the Geeky Gadgets Deals store today, the Arduino Automatic Smart Plant...