For my 30th Birthday I decided to have a D-Themed costume party, my girlfriend Kylie and I decided that we would go as Daft Punk. The costumes were quite involved to make, but we had lots of fun and they looked great!

We used a lot of resources from the internet, including a great article on how to stitch EL wire into clothes that I found here: http://www.instructables.com/id/how-to-add-EL-wire-to-a-coat-or-other-garment/.

I also learned a lot about prototyping boards (particularly the Arduino, and its clone the Seeeduino) and really enjoyed tinkering around with LED Arrays, learning the difference between common cathode and common anode, figuring out how breadboards work, and just generally collecting heaps of post at work from various electronics and EL wire companies.

Here’s a few videos showing the final result, so you can decide whether you want to bother reading any further: 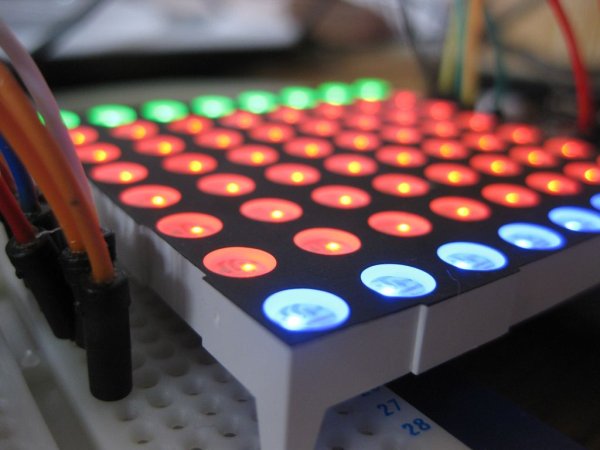 Quite a few bits and bobs went into the outfits, here’s a list of what we used.

Before you start, I’d recommend finding a talented, amazing girlfriend who can sew 100m of fishing wire and 75m of EL wire into two outfits and have the result look just like the Daft Punk originals. You can’t have mine though.

I will upload the code I wrote for the Arduino that controls the LED array so you can use that too if you like. Even if you want to change the display it’s probably easier to start with something that works already.

We were lucky that the suppliers we used were great, we ordered everything on-line and turned up in good time and good order.

Note, all the suppliers are UK based, which is great for me living in London, but might not be quite what you’re looking for. They may deliver internationally, but if not I’m sure you can find something that delivers to wherever you are.

For EL Wire, extensions, splitters and battery packs we used Surelight http://www.surelight.com/. They’re a friendly bunch based up north somewhere. Sheffield I think.

Surelight sell EL wire either by the metre, or in pre-cut and soldered lengths, which is fantastic if you don’t feel confident cutting and soldering your own wire. (We didn’t).

All the wire we bought was their Super Bright range (2.5mm) in Red (obviously..) and was very high quality. Also they delivered very quickly, within two days from memory.

READ  A Voice Shield for Arduino Board

Charlieplexed row of LED lights, for the Arduino

This is my instructable on charlieplexing a LED row/string with the arduino. I noticed that there weren't many instructables on...