Hi. I’ve just got myself an Arduino Uno R3 and I’m really new in the world of Arduinos. There’s so much to learn and explore 🙂

One of the first shields that I’m tempted to buy is the Prototype Shield. I think building a prototype circuit right on top of the Arduino is pretty slick. So why buy it when you can make it? Trust me, it is very satisfying 🙂

The first thing that comes into mind is of course to make the PCB of the shield. The two most common ways of making your own PCB at home are the photo resist method and the toner transfer method. I’ve gone down the photo resist route because I find that the circuit produced is really sharp. 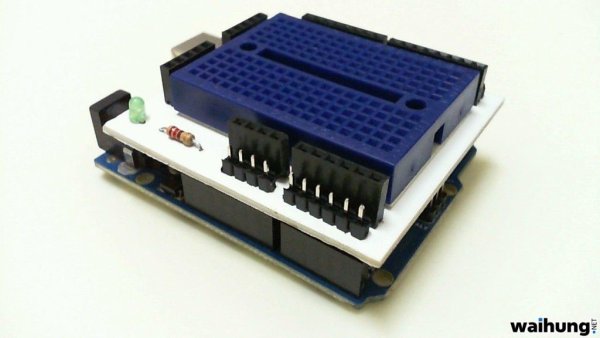 I found an EAGLE pcb file for the Prototype Shield from the arduino.cc website and modified it so that now it has more 5V pins and ground pins. Also added some text 🙂

Printed two of the circuits on a transparency and overlap them to get a perfect image.

Then I cut the PCB to size and used a small hand saw to cut it.

Exposed the board under fluorescent light for about 8 minutes.

While waiting, I prepared the sodium hydroxide solution just by adding the crystals to water. Only put a small amount of it.

After 8 minutes just immerse the board into the solution and constantly agitate it. The unwanted photo resist layer should be washed off in around 10 minutes.

Next, is to etch the unwanted copper layers.

Things That You Need

To make the Arduino Prototype Shield, you need these :

1. Hand drill to drill holes in the PCB for the components to go through.

3.  A fluorescent lamp to expose the PCB.