Hey guys! I’d like to share with you the input device I created specifically to interact with AR glasses like the Google Glass, Meta, Moverio BT or with the VR headsets like Oculus Rift, Samsung Gear VR, vrAse, Durovis Dive. Those new products are amazing and they need new types of input devices. This instructable will describe how to build your own “Gravity Touch bluetooth glove” and I will also give you some tips to build your own Durovis Dive VR headset so that you will be able to enjoy full mobile VR. Because this glove will be of most use for VR game, I have created a Unity3D plugin for Android that handle the communication between your app and the glove. It means that you will be able to use your Gravity Touch glove to interact with your Unity3D VR game. The Arduino code and the Java class I wrote to handle the communication between the glove and the Android device will also be available so that you will be able to adapt them for your need.

The prototype of the glove described here will be providing the following data wirelessly:

The glove communicate through bluetooth with either a smartphone Android or a computer (not reviewed here). Take a look at the video to have an overview of its functionalities and possible uses.

This instructable can also be useful for you if you want to create an Arduino system that must communicate through bluetooth with you Android phone/tablet, if you want to acquire touch input with your Arduino or if you want to use the FreeIMU device wirelessly. 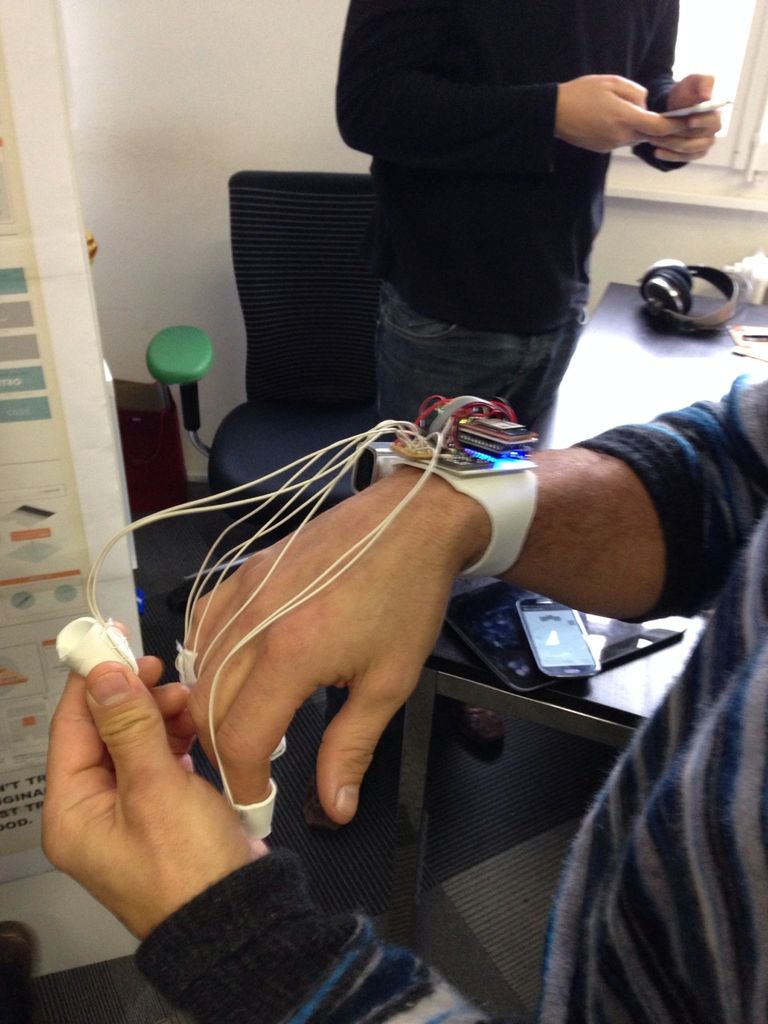 Electronic parts you will need:

Materials used to build the glove (link for illustration purpose only, you should be able to find all the stuff below in your hardware shop):

The glove will be composed by a bracelet with a cardboard platform that will serve as the base for the electronics part and the five fingertips touch sensors (or less if it fits better your need). On the top of the bracelet’s platform we will construct two layers of electronic parts. On the first layer, we will put the FreeIMU along with the 5 metal film 10kΩ resistors. The second layer will contain the Bluetooth module as well as the Arduino micro. The battery will be attached to the bracelet with a velcro tape.

Let’s start by crafting the bracelet.

Step 2: Making the base structure: the bracelet

The bracelet will be the base structure where we are going to put all the electronic components.

Take the PVC foam sheet and draw on it with a pencil the shape of the bracelet as illustrated on the schematic below (dimension in millimeter). Grab the scissors and cut the foam by following the line.

Once you have your bracelet ready, cut a rectangle 57 x 50mm in the cardboard, it will be used as the solid base for the electronic parts.

Cut then 45mm of the velcro tape and paste it on the bracelet as illustrated on the schematic above.

Step 3: Overview of the electrical schematic

Before starting to solder, let’s take a look at the electric schematic shown above. As you can see, the schematic is pretty simple.

Power: the Arduino is powered by the 9V battery through its Vin pin. We take advantage of the Arduino’s internal 5V converter to provide the 5V power to the FreeIMU and bluetooth boards by connecting there 5V pin to the 5V output pin of the Arduino. For more information about the min and max input voltage the Arduino can handle, please check the Arduino’s documentation. 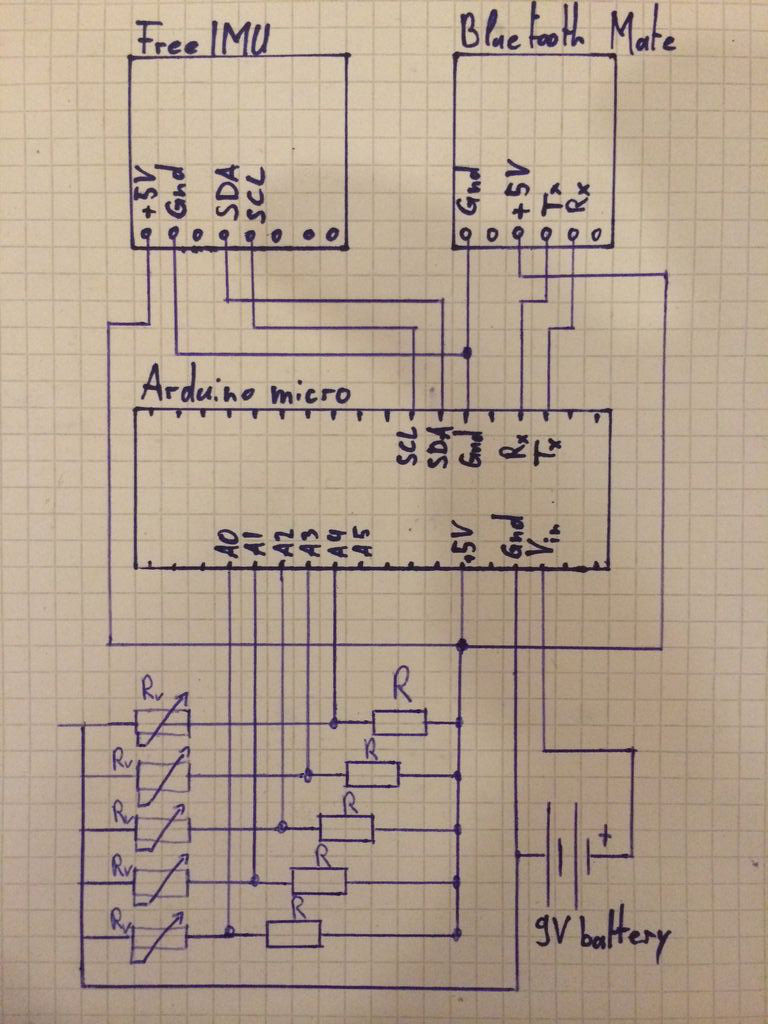 Touch detection: the touch detection system is as simple as a voltage divider. I use the fact that the resistance value of the Force Sensitive Resistor decrease at the same time the pressure applied on it increase. This variation of resistance will induce a variation of voltage across the Rv and this is what we measure with the analog to digital converter of the Arduino (pin A0-A5). The resistance range of the Force Sensitive Resistor goes from 1MΩ (no pressure) to 2.5kΩ (full pressure applied). As the current driven across the five voltage divider is delivered by the 5V pin of the Arduino, I don’t want to drive more than 500uA for each voltage divider which means that R + Rv when Rv is minimum must be equals to 10kΩ. As Rv min = 2.5kΩ => R = 7.5kΩ. This explain the choice of a value of 10kΩ for R (the closest value would be 8.2kΩ, I took the closest value I had in my lab 😉 ). The voltage values across Rv recorded by the Arduino will go from 5V when no pressure is applied to 1V under full pressure.

Froggy put on a little eye makeup before heading out for the new ride, "The Seesaw."  The Seesaw is the...