Getting Started with Wi-Fi

In this project, we will learn how to get started with the ESP8266, an inbuilt 4Duino Wi-Fi module and connect to a local access point. The 4Duino display is used to print the status of the connection for debugging purposes. 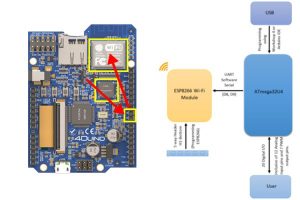 The ESP8266 Wi-Fi Module is embedded in the 4Duino. ATmega32U4 communicates and controls the ESP8266 via Software Serial with a default baud rate of 115200 bps. For this purpose pins D8 and D9 are used. However, if the Wi-Fi modules is used in your project then the pins D8 and D9 cannot be utilised in your design.

Additionally, you can program or upgrade the firmware on the ESP8266 via the 5 way Header. For this you will need a 4D Systems’ programming cable or a PA5 Adaptor. For more information refer to the 4Duino datasheet at www.4duino.com

First step towards programming the ESP8266

The “ESP8266.h” header is incorporated in the skeleton code. This could be downloaded at:

In the skeleton code, there is a section commented to initialise the ESP8266 Wi-Fi Module. All you need to do is uncomment these lines of code and the initialisation is done for you. Now the Wi-Fi modules is ready to be controlled using AT Commands.

The default baud rate is set to 115200 bps, however the maximum baud rate at which Software serial actually works is 19200 bps. So in the code it requires changing the baud rate and this is done for you in the skeleton code.

To communicate to the ESP8266 Wi-Fi module, AT Commands are used. You can use the library mentioned above and use its functions for convenience instead of using AT Commands directly. More information on the library functions can be obtained at:

In this project, the library functions have been utilised to communicate to the ESP8266.

The program then commands the Wi-Fi module to join to the AP, which can be your home router. SSID and PASSWORD are defined in the code respectively. After joining the AP it will print the Local IP address on the display.

Read more: Getting Started with Wi-Fi

This IoT system monitors the soil moisture using Arduino and sensors. Data are sent to an IoT cloud platform to...