We all are quite familiar with Electronic Voting Machines, where your vote gets registered electronically and you don’t need to use ballot paper to vote in election. Today security is a major concern and it also needs to be ensured that someone can’t vote twice, so this problem can be solved by introducing Finger Print Based Voting, where a person can be authorized based on his finger Print. This will also stops fake voting. So today we are building FingerPrint Based Biometric Voting Machine using Arduino. 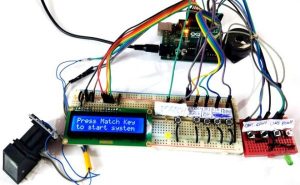 Finger Print Sensor Module or Finger Print Scanner is a module which captures finger’s print image and then converts it into the equivalent template and saves them into its memory on selected ID (location) by Arduino. Here all the process is commanded by Arduino like taking an image of finger print, convert it into templates and storing location etc.

In this FingerPrint Voting Machine Circuit, we have used Finger Print Sensor Module to authenticate true voter by taking their finger input in the system. Here we are using 5 push buttons to Match, Enroll/back, Delete/OK, UP and Down. Enroll and Del key have double features here. Enroll key is used for enrolling new finger impression into the system and back function as well. Means when the user wants to enroll new finger then he/she needs to press enroll key then LCD asks for the ID or Location where user wants to store the finger print output. Now if at this time user do not want to proceed further then he/she can press enroll key again to go back (this time enroll key behave as Back key). Means enroll key has both enrollment and back function. DEL/OK key also has same double function like when user enrolls new finger then he/she need to select finger ID or Location by using another two key namely UP AND DOWN now user needs to press DEL/OK key (this time this key behaves like OK) to proceed with selected ID or Location. Match key is used for whenever voter wants to vote then he/she needs to authenticate first for true voter by keeping finger on Finger Print Sensor, if he/she passed in this authentication then he/she can vote.

To learn more about enrolling finger prints and other things, Check our previous tutorial on interfacing Finger Print Sensor with Arduino, and also check our Demo Video at the end of this tutorial.

Now if the user wants to remove or delete any of stored ID then he/she need to press DEL key, after pressing DEL key, LCD will ask for select location means select ID that to be deleted. Now user needs to select ID and press OK key (same DEL key). Now LCD will let you know that finger has been deleted successfully.

Now when user wants to vote then he/she needs to press match key and then buzzer will beep and LED will also glow and LCD will ask for place finger over fingerprint module. Now Arduino will give you three attempts to put your finger. After placing a finger over fingerprint module fingerprint module captures finger image find its IDs is present in the system. If finger ID detected then LCD will show authorized Voter. It means the user is authorized to vote. And then the system moves to next stage for voting. Now Green LED will glow it means now voter can vote for their candidates by pressing a relected key (from RED bread board in this demonstration). Now if the same voter wants to vote again then the system will show it ‘Already Voted’. Means same voter can’t vote again and buzzer will beep for 5 seconds. If any Non-registered user wants to vote then finger print module will not detect its ID into the system and LCD will show ‘No Fingerprint Found’.

CAN1, CAN2, CAN3 here represents the Candidate 1, Candidate 2 and Candidate 3, who have stood for election.

The circuit of this FingerPrint Based Voting Machine Project is very simple which contains Arduino for controlling whole the process of the project, push button for enrolling, deleting, selecting IDs and voting purpose, a buzzer for alert, LEDs for indication and 16×2 LCD for instruct Voter and showing the result as well. Yellow LED indicates that fingerprint module is ready to take an image of the finger and Green LED indicates that system is ready to take a vote or see results.

In a program, we have used Adafruit Fingerprint Sensor Library for interfacing fingerprint module with Arduino board. You can check the complete Code below. Here we are explaining main functions of the Arduino Program. 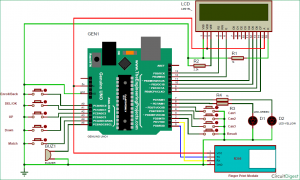 In setup function, we have given directions to defined pins and have initiated the LCD and Fingerprint module.

After it, in void loop() function, we have waited for check key and press Match key to start the finger print to take input and compare captured image id with stored IDs. If a match occurs then proceed with next step.

Given function is used for entering ID to be deleted and calling uint8_t deleteFingerprint(uint8_t id) function that will delete finger from records.

Given function is used for delete finger print from the record of selected ID.

Given Function is used to taking finger print image and convert them into the template and save it by selected ID into the finger print module memory.

Given function is used for Voting and display results:

Check the Full Code and demonstration Video Below.