Important notice: Final (i.e. relevant) version is at the last step of this instructable.
If you want to build a Simon, that is the recommended version.

The rest of the steps show how this evolved from a bare-bones game for LED 13 and Serial (i.e. zero components) until my mail order came through 😉
Each version has a show-off video, of course (making the video is part of the fun for me).

The result is something a noob can build and enjoy playing. If you’re just starting, it can be your first project too. 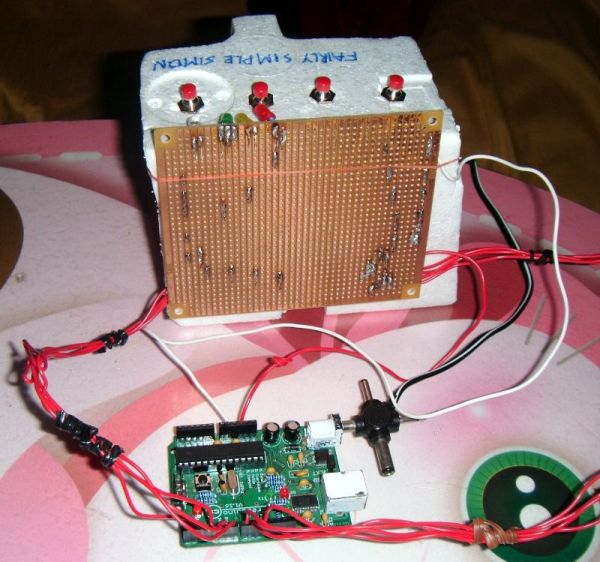 Anyway – this was the first Fairly Simple Simon:

Here’s the  “OMG, I’ve actually soldered something” story:
I’ve been following some Arduino instructables here, but I was never a hardware kinda guy. Last time I did anything that wasn’t software, Bruce Lee was still alive. There’s a reason for that: I’m as skillful as Steven Hawking when it comes to building stuff. Especially soldering. On top of all that, I live in Trat, Thailand. We don’t have Radio Shack here. We have a Mom and Pop’s electronics store where the wife speaks some English (and I speak some Thai). I also show them photos of stuff I need on my cellular. Not what you’d call an Arduino community.

When I was at Barcamp BKK, I bitched to the roboteer @bm_ about not being able to indulge in hardware, and he simply gave me a Freeduino and said “install the software, stick it into the USB, and you’re there”. He also gave me addresses of internet all-the Arduino-you-can-eat shops, and I’m still waiting for my breadboard (on account of xmas order-jams).

Simplest Simon: a zero-components Arduino game
So what do you do with a naked Arduino? The first ting I did was simplest simon: A binary version of Simon for pin 13 on-board LED and serial connection.
Got  an Arduino lying there and you’re too lazy to connect stuff to it? Just upload it. Mighty good value-for-hassle ratio, I think 😉

Still – it didn’t let me feel like a maker at the time.If  you play it via serial, then you need a computer. So you might as well play Tetris. I needed to make something really real.

Step 1: Build the board (breadboard version)

Note: if you want to build something – build the latest version.
Stuff below is kept for historical reasons.

If you have a breadboard (one day I’ll have one too), you can build this quite easily. See the Fritzing diagram below. It is a simple board with 4 leds and 4 normally-closed switches (each led goes via a 150 Ohm resistor, and each switch has a 10K Ohm pull-up resistor connecting between the output and ground).

Note: if you want to build something – build the latest version.
Stuff below is kept for historical reasons.

If you’re fine with the breadboard version in the previous step, you can skip this one. That’s the way I did it. Some of it may be useful, other parts can probably serve as negative examples 🙂

When I went to Mom and Pop, and showed Mom a breadboard on my phone, she’s offered me a stripboard. I didn’t know there was a difference, so I assumed stripboards were solderless too. That’s how I’ve invented a technique of “stitching” components thru the board in a way that makes it [sorta] touch the conductive strip behind the board. This led to switches that had HIGH/MAYBE states etc. Soldering everything was easy – and simply fixed all the problems.

One good things that came out of this fiasco is that I wrote simon_check_wiring.pde to check whether LED and switch connections are OK. It’s also handy if you’re not sure which LED or switch wire is which (I know I could label them – but that’s for clerks). See comments inside the code.

The “chasis” is made of a piece of styrofoam from some package. It was easy to create the holes for the switches with a cutting knife (a hole with a standard cutting knife’s width as diameter is exactly right for this kind of switch). The thing had a tendency to topple over backwards because of the weight of the board, so I used a lighter and a battery to balance the thing.

Upload fairly_simple_simon.pde to the Arduino, and start playing: 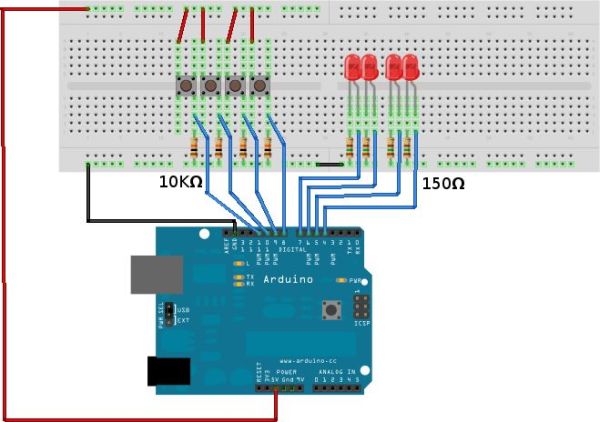 After reset, all LEDs flash several times, then they cycle a few times and you start playing a game at level 4.

Playing a game at level N:

For more detail: Fairly Simple Simon – the evolution of an Arduino game