After many hours of work I’m very happy to finally publish all the sources for the ESP8266 PlaneSpotter project. It is not yet really in a V1.0.0 state but I’m sure with the help of the community it will quickly get better. While this post is more a “making-of” you can find build instructions on Github: 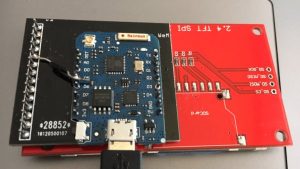 A few months back I had already built and published a PlaneSpotter project for the tiny OLED screens. It was quite useful but could only display text information about the nearest plane. How much cooler would it be to have a tiny and affordable device displaying a map with airplanes on it, just like the apps you have on your smart phone? The idea kept coming back to me but one important puzzle piece was missing: the TFT library could only display raw bitmap files (BMP) and I didn’t know of any mapping service which would let you download bmp images. Of course, I could have built a web service which would have converted JPEGs and PNGs to BMPs on the fly but that wasn’t really my goal. So I was stuck with the idea until I recently found Frederic Plante’s fork of the JPEGDecoder library with adaptations for the ESP8266. This suddenly changed the game and I started working on the PlaneSpotter Color project.

It seems that this library has seen several iterations and forks. It is built around Rich Geldreich’s picojpeg library which is very good on embedded devices with limited memory. The library was wrapped by Makoto Kurauchi 3 years ago for Arduino. Then Bodmer created a new repository and added more samples until Frédéric Plante ported it to the ESP8266. There might have been too much forking and copying but it is still a very good example for how open source works. Since this library is currently not available in the Arduino IDE library manager you’ll have to clone Frédéric’s repository or download the zip file.