DIY Music Keyboard: How to Make Sounds With Arduino

They say that “You can become anyone”, so why not become Beethoven or Mozart? The only limit is your imagination.

The DIY Arduino keyboard or the Musical-duino has a few buttons. Pressing them makes different tones according to the pulse sent to it by the Arduino. Your Arduino can be used to make different instruments. It can even be used to make a proximity sensing device to help blind people, a device that detects obstacles and makes different voices depending on what they’re approaching. You can also make a Theremin out of an Arduino by attaching LDR’s.

After making one you could play the “legend of Zelda” and upload the video to YouTube so that we can share your work of art here on our website (Somebody please do it!)

Don’t know what’s a threshold voltage? Don’t you worry, we’re here to explain it to you!

In later steps, each button is identified in comparison. Corresponding frequencies are produced online Piezo buzzer using the Arduino.

Connecting the Push Buttons as Keys for the Arduino Keyboard 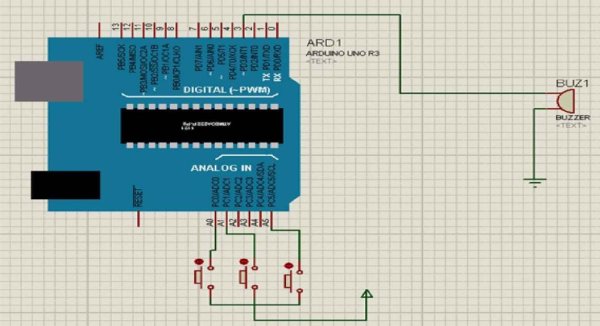 Next, do the following:

My first DoorBell Mote prototype was working nicely and it allowed monitoring the door bell (while also triggering it remotely – toddlers...