Having just purchased a half decent bicycle, and living in a city with a bike theft rate almost as high as New York, I wanted to have some peace of mind that if a thief with an angle grinder were to cut through my U-lock I could still catch them.

My main design constraints were as follows:

This project is pretty cheap, especially if you compare it to the cost of replacing your stolen bike! I’ve outlined the cost of all the components used in my design below. I was able to use some old parts I had lying around and hopefully you will too. If I had bought everything needed brand new this would have cost about $225. 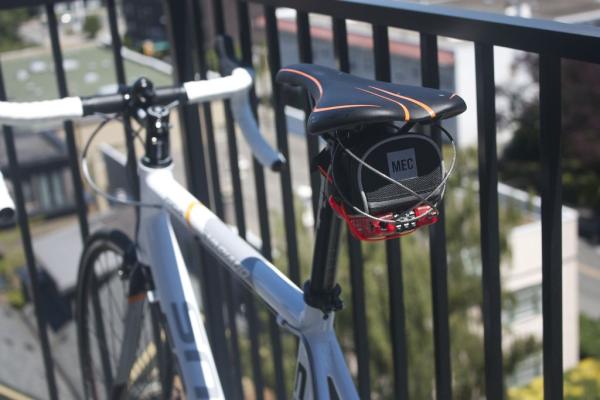 The transistor is a device that is used for switching. A very small input can enable a very large current output. In the case of the TIP127, it can handle 5 amps and has a gain of 1000. Roughly this means that if you were to need to drive 5 amps your effective input would need to be 5/1000 amps.

The PNP transistor is “off” when you connect the base to the positive side of your circuit and on when it is connected to ground.

The way it is used in the bike lock is pretty clever I think, the steel cable of the lock will connect the positive side of the circuit to the base of the transistor. When the lock is cut, the connection is broken and the path of least resistance will be to ground. When the base is grounded like this power is supplied to the Arduino

Test out your transistor circuit on a breadboard before soldering to your Arduino prototyping shield. While testing your circuit use a switch in place of the retractable lock in the next step. With the TIP127 hook the circuit as per the schematic above. If you want to use a different transistor than the TIP127 the only thing that will change is the value for R1.

Assuming that you have the lock that I recommended in the intro, the first thing is to remove the screw that connects the two halves of the plastic case. The use a wedge to pry open the edges and separate the two halves.

At this point it is a good idea to take a picture of the inside of the lock so that if any pieces fall out you can put them back later. I forgot to do this which resulted in a lot of wasted time studying the mechanism.

Time to get out the soldering iron. Make one connection for a wire on the brass ending of the steel cable. It is located on the spool the the cable wraps on when inside the lock. Make the second connection on the spring that holds the pin that the cable makes contact with when you insert it into the lock. Use your DMM to check for conductivity when the cable is inserted into it’s hole and that there is no conductivity when it’s lose. A lose cable is the same effect as cutting the lock.

Congratulations if you’ve made it this far the hardest part it over! Lastly just run your two wires through the holes you’ve made and close up the case. If you’re finding that the screw is not enough to hold the two halves together anymore a generous coating of epoxy resin is recommended. Also, depending on what type of bag you will use for the electronics it may be useful to put the screw through a zap strap so that you have a way of securing it to the bag. Put some epoxy on the zap strap as well. Just don’t be too generous or you may gum up some of the important mechanisms of the lock. During this step I managed to glue the retracting mechanism of my lock so be very careful. Clamp your lock together and leave it for at least an hour.

The ultimate GPS breakout from adafruit works well in this application. Hooking it up couldn’t be easier. Find a good place for it on your pro to shield and then just connect the Vin to 5V, GND to GND, Rx to digital 9, and Tx to digital 8.

This is all you need to get the GPS working however adafruit has nicely broken out Vbat so you can supply 3.3V to the GPS’s internal clock when the power is off. This will give you quicker startup times. I used one of my LiPo cells to supply this with 3.7V. This can in theory discharge both LiPo’s unevenly and be dangerous, however considering the power used it very small I think the uneven discharge rate will not be a problem. And so far so good, if i have a spectacular problem with respect to this I will be sure to post it here.

Havahart traps are really nice if you have pests to rid your home of but you don’t feel the need...