A digital soil moisture meter is used for indicating the water content of a given soil sample. 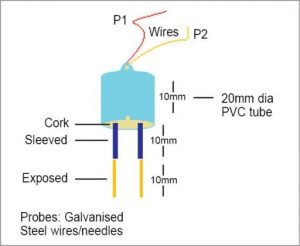 As crop production requires water at different stages and in different amounts, it is important to measure soil moisture from time to time to know its status.

Front-end of the digital soil moisture meter is a simple soil moisture sensor head, built around a few easily-available parts. Working of the sensor head electronics is self-explanatory, so just follow the conceptual drawing (and schematic drawing) shown in Fig. 1 to proceed with its construction.

Complete circuit diagram of the soil moisture meter is shown in Fig. 2. After construction of the sensor head, power it off a regulated 5V DC supply.

Insert the probes of the sensor head into the soil to determine its moisture content, and carefully adjust the preset VR1 so that voltage just above 3V is available at pin A1 of Arduino (Board1) if the soil is wet enough.

if necessary, until you are satisfied with the calibration process. (Note that the depths of penetration of the probes into the soil affect calibration.) Link the sensor head to the rest of the hardware to complete the project.
Rest of the hardware is a combination of Arduino microcontroller and a solid-state display panel. For compactness, Arduino Nano V3 platform is used to drive the 16×2 LCD panel.

Though a 6V battery pack is used to energise the hardware setup, you can also use external  DC power in 7V – 12V range at VIN of Board1 without any problem. The 10-kilo-ohm preset (VR2) is included to adjust the contrast level of the display. Similarly, the 100-ohm resistor (R2) limits the operating current of the backlight lamp inside the display panel.

After building the hardware, load the code (sketch) to the microcontroller, that is, copy the sketch, paste it into Arduino IDE, compile and upload. It should work at first try and you should get the message shown in Fig. 3 on your LCD screen.

A single-side PCB for the soil moisture meter is shown in Fig. 4 and its component layout in Fig. 5. Enclose the PCB in a suitable box.

Connectors CON1, CON2, CON3 and CON4 are for connecting the sensor probe, analogue input, board1 and LCD1, respectively.

Arduino Nano V3 can be powered via the USB mini-B connection or 5V regulated external DC power supply at 5V pin on Board1.

CH340G chip on Arduino Nano V3 is only powered if the board is being powered over USB. As a result, when running on external (non-USB) power, 3.3V output (supplied by CH340 chip) is not available. Arduino Nano V3 can be programmed with Arduino software (IDE). Just select Arduino Duemilanove or Nano w/ATmega328 from Tools Board Menu, as shown in Fig. 6.

Lab note. The project was tested at EFY using Arduino Uno board.

Scientists at the Ulsan National Institute of Science and Technology have developed a thermoelectric coating that can be directly painted...