The meaning of the term “high power LED” is rapidly evolving. Although a 350mA LED could easily earn the stamp of “high power” a few years ago, it could not hold a candle to the 20A LEDs or the 40A laser diodes of today. 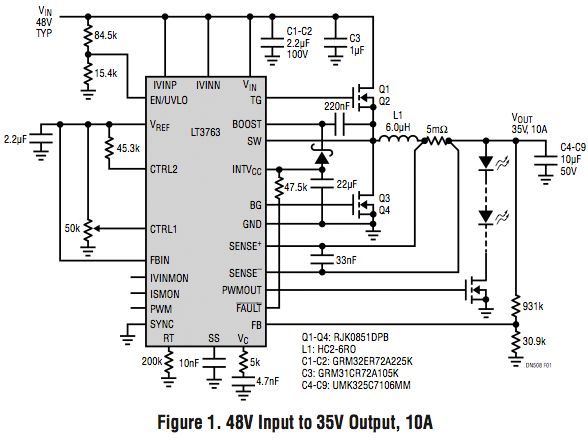 The LT3763 is a 60V synchronous, step-down DC/DC controller designed to accurately regulate LED current at up to 20A with fast PWM dimming. It is a higher voltage version of its predecessor, the LT3743. It can be applied in a number of other applications thanks to its three additional regulation loops:

1) An output voltage regulation loop enables constant output voltage operation. This can be used to provide open-LED protection or charging termination for a battery charger.

2) A second current regulation loop can be used to set an input current limit.

3) An input voltage regulation loop can be used for maximum power tracking (MPPT) in solar-powered applications.

Figure 1 shows a design that delivers 350W output power to drive up to seven LEDs in series from a 48V source. At this high power level,

dissipated power is a major concern, so high efficiency is critical. Each 1% of efficiency improvement reduces the loss by 3.5W—significant if the total power loss budget is less than 7W. This circuit is optimized to operate with 98.2% efficiency at full load—Figure 2 shows the efficiency reaching 98% when LED current is above 3A and peaking at 98.4% at ~6A.

Its been awhile since i last posted something here. Was kinda busy with my university exams & all! Idea for...