The D.I.Y. movement has many implications for the future of creativity and commerce. The impact of inventing what one needs rather than purchasing it promises to be empowering, fun, and inspirational. In a long term effort to develop dynamic computer controlled surfaces, I began exploring fluid control (in this case, compressed air) as an alternative to electric motor driven actuators. The hypothesis was that the expense, both in electricity and dollars, would be less as the system scaled up. While the expense calculation has not taken into account the processes of compressing and shipping air supply tanks, suffice to say the unit cost of each actuator was less than electric motors (with equivalent force) and less than 1/5 the cost of a commercial pneumatic cylinder (with required hardware for computer control). 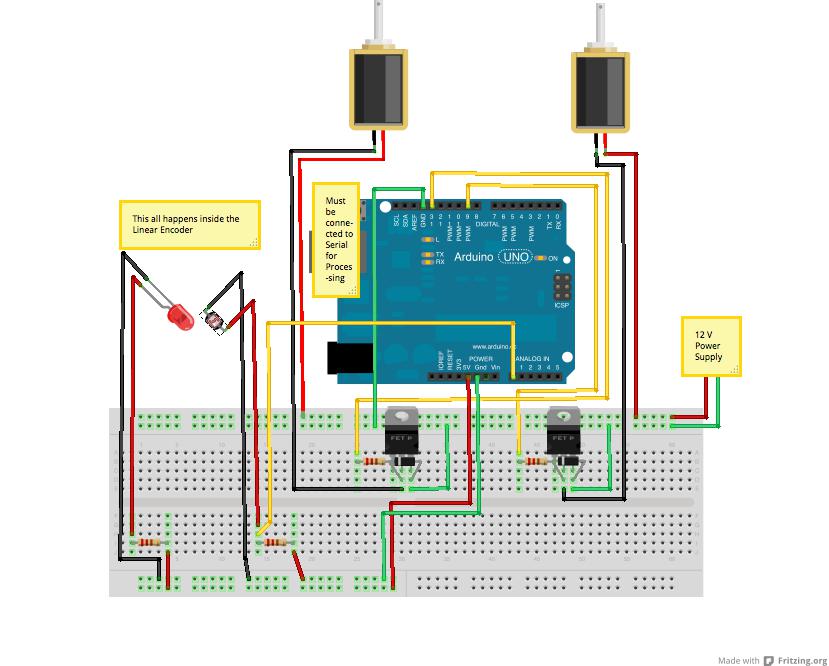 In addition to a D.I.Y air cylinder, I examined the function of commercial linear encoders and decided to build one which could be custom-housed to follow the movement of the cylinder. The final design is clearly visible in the video above. The encoder hardware is quite simple. A L.E.D is aimed toward a photo-resistor, 45 degrees to the plane of the encoder strip and 90 degrees to each other. The encoder strip was a desktop printer Illustrator image of evenly space 3mm lines alternating black to white.

The software was run through Arduino. It “looked” for value changes in the photo-resisitor readings and counted the stripes as they passed by. (Full code in the appendix)

The only hardware necessary to put them together was a saw, a crecent wrench, something to cut the steel ( I recommend a 41/2″ grinder with a cutoff wheel!) a drill or drill press and a top to match the threads of the quick fittings. (Full assembly instructions to follow…)

Once a cylinder was assembled, it was tested with compressed air. 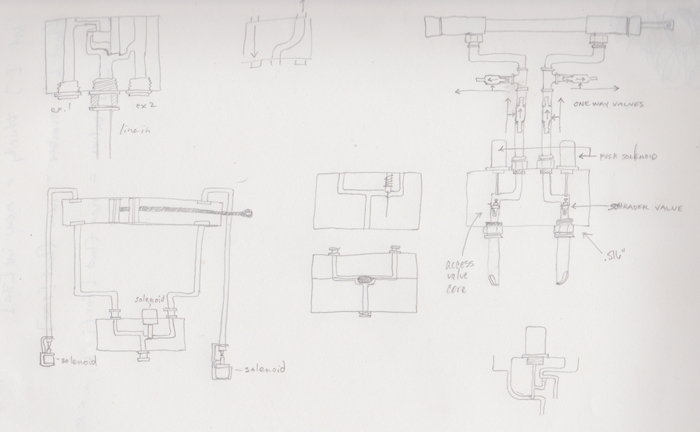 The component I didn’t personally develop was the switching system comprised commercially of solenoid switches. There was a logical reason for this. Commercial multi-directional solenoid switches are generally regarded as SUPER high tech engineering and manufacturing. After a couple of weeks of vacillating and only coming up with this: