As an entrepreneur, I’m always looking for great projects to share.  Myself and two other classmates recently put together a project for our Master’s of Engineering program in Technical Entrepreneurship, and we’re thrilled to share our vision with you.  Remember that old Connect 4 game sitting in your basement/closet/chest/Batcave?  You’ve always wanted to upcycle that into a functioning binary clock utilizing the awesome powers of an Arduino, haven’t you?  Of course you have – well, you’re in the right place! 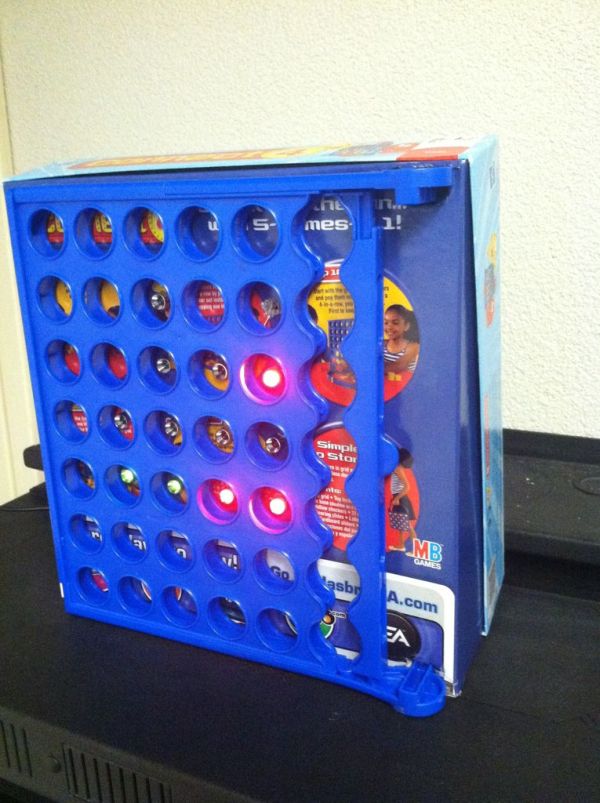 This is a great weekend project that will provide you with a sleek and nostalgic binary clock all at once. We focused on recycling every part of the Connect 4 game to exemplify our “green” standards, and be as creative as possible. The Connect 4 works superbly in displaying a binary clock because it has perfectly rounded holes to showcase the LED-based binary numbering system.

You don’t need many supplies to make this binary clock, and it’s a great way to utilize an old Connect 4 game if you’ve lost some of the pieces, or simply want to show off your mad creative skills. And don’t worry about the coding – which we struggled against in an epic battle between sanity and madness – we already have it laid out for you! There’s not much of a time commitment and a fun result is waiting for you, so let’s get started!

Here’s what you’ll need to build your very own Connect 4 Binary Clock:

*Note: Keep in mind that red LED’s emit a brighter light than all others.  Therefore, we need to up the brightness of the other LED’s, so that they’ll match the brightness of the red ones.  This is why we need to buy super-bright LED’s to counter the red LED’s.  We unfortunately made the mistake of not doing this, and the light wasn’t bright enough. However, our errors are your knowledge!

Before we begin, let’s review some binary!

Don’t get freaked out – binary isn’t as hard as it seems, especially in clock-format. Take a look at the pictures  – you’ll notice that the clock is formatted into four columns, and four rows.  Each row corresponds to an increasing number, doubling from 1 to 2 to 4 to 8.  The columns are grouped into two sets – the hours (left two columns), and the minutes (right two).  Let’s take a look at the minute columns on the right:

You’ll also need to know that this clock is a 24-hour clock, not your typical 12-hour AM/PM clock. The easiest way to decipher this is to subtract 12 from the hours if the clock’s additive total is between 13 and 24. More on this later when we start using the Arduino! 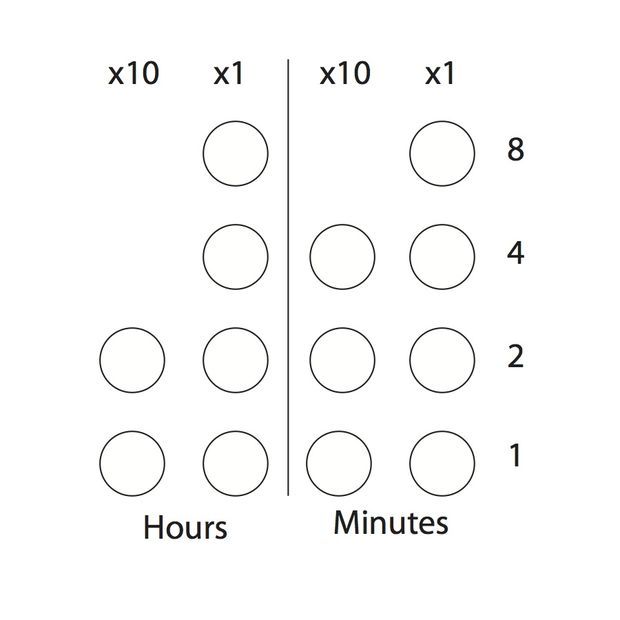 Although the explanation is pretty long, it’s just simple addition & subtraction.  Use that elementary school knowledge and you’ll be a whiz in no time!  You’ll find three examples in this step to help you get the hang of reading a binary clock.  Check out the pictures, and quiz yourself.  Answers are below (no peeking):

Alright, let’s begin.  Unpack your new or old Connect 4 game, play a few nostalgic rounds with your buddies, and then get ready to build the clock!

How are we going to make this clock stand, you ask?  The answer is simple – we’re going to utilize every part of the game…including the packaging!  Take the Connect 4 game board and place it on its side and set it square to the bottom of the Connect 4 game box (we set the board on its side because that allows us to create a symmetrical face – if you use the board in its original setup, you would have to offset the clock to the left or right because there is an odd number of vertical columns).  Ensuring that the game board is squared up to the game box, mark the center of the 13 holes noted in the second image in this step – If you don’t understand why we marked the holes in this specific orientation, please refer back to the previous step that explains how to read a binary clock.

You will next want to find a drill bit that most closely matches the threaded part of the LED holder. Keep in mind that you can always re-drill a hole with a larger bit so err on the side of caution.