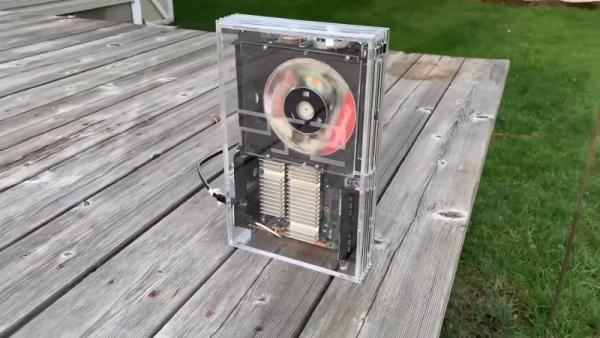 CLEAR PS2 IS THE CRYSTAL EDITION WE DESERVED

Every so often, console manufacturers release a crystal edition of their hardware that never really lives up to the hype. The manufacturing realities of producing optically clear plastic mean the expense is rarely justified, even for a special edition. Instead, we get hazy, smoky translucent cases that are comparatively underwhelming. Here to rectify that, [BitHead1000] delivers on a properly transparent PlayStation2.

While the title calls it a Glass PS2, the cutting tools used and the labels on the material make it pretty clear (pun intended) that this build uses acrylic. Regardless, it’s an attractive material all on its own, and much more suited for such a build. To get the best possible visual effect, the internal shielding is removed and tossed in the bin, with plastic standoffs used to hold things in place instead. The case is then assembled around the components, giving an unparalleled view of the hardware inside.

It’s undeniably cool to watch the optical drive doing its thing inside the case when it’s switched on, and a few internal LEDs only add to the spectacle. We’ve seen [BitHead1000] pull off other casemodding feats, too, such as the fire breathing N64. Video after the break.

Source: CLEAR PS2 IS THE CRYSTAL EDITION WE DESERVED

ROBOT GETS AROUND ON ALL FOURS, THANKS TO MANY, MANY SERVOS

As far as robots are concerned, wheels and tracks are great ways to get around when you’ve got serious work...