It has been a while since we’ve seen a 86Duino, but [TheRasteri] reminded us about it, with his video showing how to use one to run classic MS-DOS games. To be fair, the computer isn’t really an Arduino, it’s essentially a tiny 486 PC on an Arduino-style PCB. 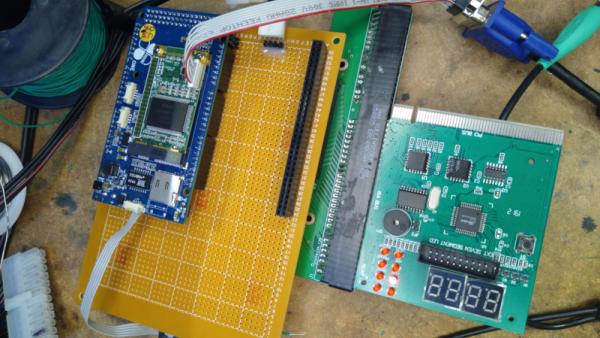 If it were just running DOS games on a tiny PC, that wouldn’t be very newsworthy. However, the board by itself has no video card and, as [TheRasteri] points out, sound card compatibility is also a problem. A carrier board, however, has a tiny VGA card on it, and thanks to some work from another user, it is possible to add an ISA bus to the board if you want to plug in a legacy sound card.

The ISA hack was done neatly, but it is a bit of wiring. Instead of using a normal ISA backplane, it is possible to use a PC/104 backplane, if you have cards that will fit that bus — electrically, they are the same. The board was able to run DOOM and Quake at nearly 30 frames per second. Not bad. He did have problems getting a mouse to work, though.

Got a bit nostalgic watching him use QBasic to directly write to registers on an ISA card. If you want an old DOS machine and don’t want to tie up a lot of space, this could be the ticket. Especially if you need it to run some old piece of hardware that won’t work with modern computers. We have to wonder if anyone would make a USB to ISA adapter out of something like this. The drivers would seem to be the hard part.

We saw the 86Duino nearly 10 years ago when there were a few other x86 single-board computers around. Apparently, lots of people want to run vintage games.