A Cheaper ESP8266 WiFi Shield for Arduino and other micros

Rev 14 of this project revises libraries and code to work with ESP8266.com IDE plug-in V2.2

Rev 11 of this project cleans up other attempted connections if it is already connected. Also uses the timeout set by the web config. Rev 10 ignored the timeout setting.

This is Rev 10 of the this project. Rev 10 uses a non-blocking WiFi library, pfodESP8266WiFi, that lows for higher through put particularly for Windows Clients. It also allows for web page configuration of the Serial baud rate. 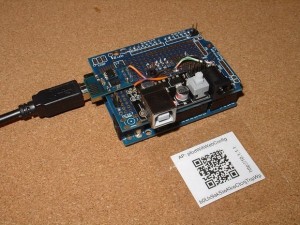 This is Rev 8 of the this project. Rev 8 has improved ESP8266 code that is more reliable.NOTE: Each packet sent halts this code until the receiver (client) acknowledges the packet. This can take between 10mS and 200mS. During that time the incoming Serial data from the UART is not being handled. The incoming serial buffer can buffer 256 bytes. At 9600 baud it takes about 270mS to fill the buffer so as long as you keep the Serial baud rate to 9600 or less you should not loose any outgoing data while the ESP8266 is sending the previous packet. This is providing you have a good WiFi connection. If the WiFi connection is poor, a packet can be lost and have to be re-transmitted by the ESP826, then the Serial incoming buffer may fill up if you are trying to send a lot of data and some of your data my be lost.

READ  How to Send Data from Arduino to Webpage using WiFi

This is Rev 3 of the this project. Rev 3 adds a connection time out setting to the web page configuration. If there is not send or receive of data in that time the WiFi Shield closes the connection and waits for a new one. This ensures the WiFi Shield recovers from ‘half closed’ connections which happen went the client just disappears due to bad wifi connection, power loss at the router or forced shut down of the client. See Detection of Half-Open (Dropped) TCP/IP Socket Connections for more details.

For More Details: A Cheaper ESP8266 WiFi Shield for Arduino and other micros

Flip Intro There is something kind of magical about swimming when you are a child. Do you remember growing up...