Smart lightbulbs cost your firstborn child. Which is a shame, because smart lights unlock tremendous potential for home automation, energy savings, and all sorts of cool projects.

And now there is! For $19 on Amazon, you can get a 4-lightbulb kit from China that ordinarily is limited to 4 channels from a single remote…but with some creative hacking, can be used to control an unlimited number of channels using an arduino and a very simple RF module!

Here’s a video of them in action as part of our smart bathroom project (Instructable for that coming soon!): 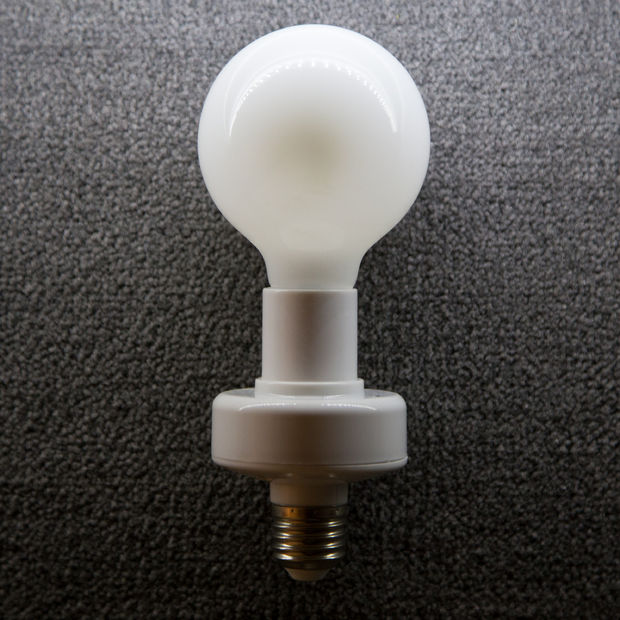 We’ll start by cracking open one of these light sockets and reading its memory. Grab your screwdriver and remove the two phillips screws holding the housing together. The case should fall open and reveal the PCB inside.

If you look around, you’ll see a few capacitors, some diodes, a big box (the relay), a long IC (the microcontroller), a separate board tacked on (the RF receiver), and a little 8-DIP chip marked 24C04 – this is the EEPROM that stores the RF command to turn on the bulb.

Let’s take a closer look at what the memory chip holds, shall we? Using the bus pirate and the datasheet for the EEPROM chip, wire up a circuit like the one shown. You should have:

Next, let’s run a script that will dump the EEPROM data to a file using the I2C circuit we just set up. Using the terminal or command line, navigate to the folder where you downloaded i2c_dump.py and run it as follows:

It’ll produce a .hex file showing the hex values of the data.

Open up the .txt file. If it contains nothing but 0x00 or nothing but 0xFF, chances are you need to check your circuit and re-run the dump. If you see a few different values towards the start of the file and a bunch of 0x00’s after, you have a successful hex dump!

It’s a good idea at this point to try dumping a couple of the other bulbs to see what values change in this code. Don’t worry if the hex dumps don’t make sense yet, but you should notice that only one specific value in them is changing. Hmmmm…

Share this:
READ  Joule Thief" - no IC and no Transformer

Sneel is the name of my snake / eel swimming robot. This is documentation of hardware, software and mechanical design...