With LEDs being the preferred long-lasting, low-energy method for replacing less efficient forms of lighting, their uptake has dramatically increased over the past few years. However, despite their luminous outputs having increased steadily over that time, they still fall behind more conventional forms of lighting in terms of brightness. Researchers at Princeton University claim to have come up with a way to change all that by using nanotechnology to increase the output of organic LEDs by 57 percent.

Much of this realized increase has been achieved by using a new method devised by the researchers for the way the light is emitted from the LED. Current commercial LED design actually reduces the amount of light that gets transmitted because light is not channeled from where it is generated at the semiconductor junction, but rather focused by the rudimentary lens of the epoxy resin medium in which the semiconductor is contained. As a result, although LEDs are renowned for their efficiency, only a fraction of the light generated within an LED actually makes it beyond the lens. 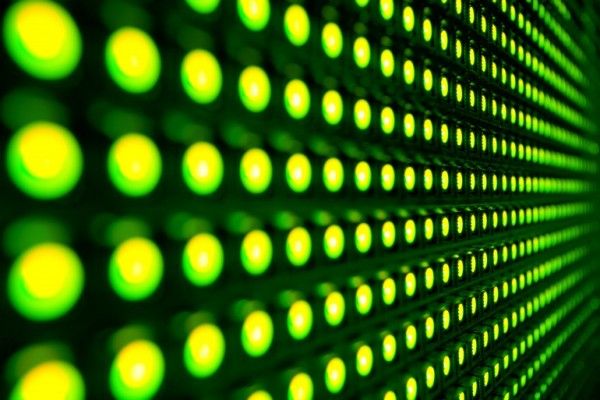 “It is exactly the same reason that lighting installed inside a swimming pool seems dim from outside – because the water traps the light,” said professor Stephen Chou, the Joseph C. Elgin Professor of Engineering at Princeton. “The solid structure of a LED traps far more light than the pool’s water.”

An LED is a very efficient way to produce visible light; much more so than incandescent bulbs which actually produce more heat than they do light. An inorganic semiconductor LED is basically just a specialized type of semiconductor diode made from various mixes of metals (usually combinations dominated by Gallium Arsenide and, to a lesser extent, Silicon Carbide).

Simply put, when the diode has power applied in the correct (“forward”) direction, this causes electrons to recombine with holes to release sufficient energy to produce photons which emit light.

Similarly, an organic semiconductor LED (better known as an OLED – the lighting technology behind flexible screen TVs) is made by placing a series of organic thin films between two conductors. Power applied in a comparable manner to an inorganic LED results in a somewhat similar hole/electron recombination, though the injected positive and negative charges recombine in the emissive layer to produce light.