Beginning Arduino Programming allows you to quickly and intuitively develop your programming skills through sketching in code. This clear introduction provides you with an understanding of the basic framework for developing Arduino code, including the structure, syntax, functions, and libraries needed to create future projects. You will also learn how to program your Arduino interface board to sense the physical world, to control light, movement, and sound, and to create objects with interesting behavior.
With Beginning Arduino Programming, you’ll get the knowledge you need to
master the fundamental aspects of writing code on the Arduino platform,
even if you have never before written code. It will have you ready to take
the next step: to explore new project ideas, new kinds of hardware, contribute
back to the open source community, and even take on more programming
languages. 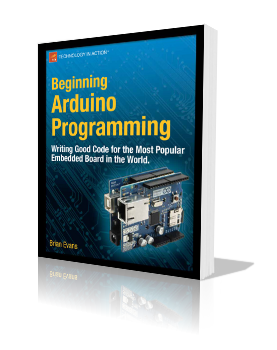 This book is for all Arduino board users who want to learn to program the Arduino board, regardless of hardware version or which devices are connected to the board. You do not need to have programmed before, but if you have, then you’ll learn how to apply core coding features in the Arduino context.

READ  Get Into the Kit Business: How to Build and Sell Your Own Arduino Shields

Book Description This book will show you how to use your Arduino to control a variety of different robots, while providing...